Southwest Finland is a region in Finland. As of November 2013, there were about 471,000 people living there. Neighbouring regions are Kanta-Häme, Pirkanmaa, Satakunta, Uusimaa and the Åland Islands.

Southwest Finland's nature differs from other regions. The most notable biotopes are the Archipelago Sea and groves. 80% of Finland's insect species can be found in Southwest Finland. There are around 20,000 islands near the coast. 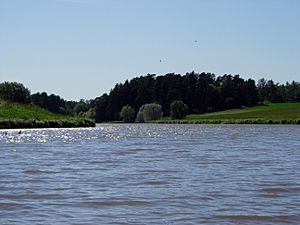 Aurajoki is one of the most notable rivers in Finland. 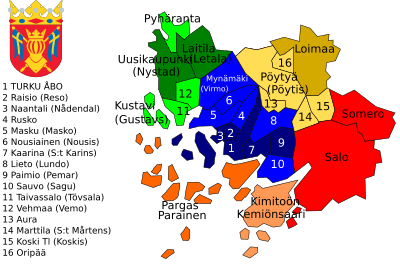 The region of Southwest Finland is made up of 27 municipalities, of which 11 have city status (marked in bold).

All content from Kiddle encyclopedia articles (including the article images and facts) can be freely used under Attribution-ShareAlike license, unless stated otherwise. Cite this article:
Southwest Finland Facts for Kids. Kiddle Encyclopedia.