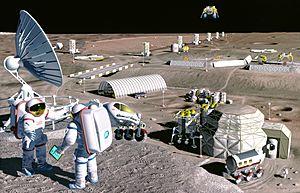 Artist's conception of a colony on the Moon 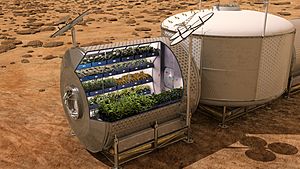 Space colonisation is the idea of humans living outside of Earth permanently. At present, there are no space colonies. However, many people have put forward ideas and thought about the first space colony. Some national space programmes see space colonisation as a long-term goal.

Building colonies in space would require access to water, food, space, people, building materials, energy, transportation, communications, life support, simulated gravity, radiation protection and money. Launching things from Earth is expensive, so it is better if the materials come from the place of the colony.

Possible sites for space colonies include the Moon, Mars, asteroids and big, free-floating space stations. Resources, such as solar energy and water, are available from or on the Moon, Mars, near-Earth asteroids or other planetary bodies. People could use them to build the space colony and live there.

Mars is the most Earth-like planet known, so the colonization of Mars may be first. Some celestial bodies might be terraformed. This means changing a body's atmosphere, temperature, surface topography or ecology to be similar to the biosphere of Earth, so that humans can live there.

All content from Kiddle encyclopedia articles (including the article images and facts) can be freely used under Attribution-ShareAlike license, unless stated otherwise. Cite this article:
Space colonisation Facts for Kids. Kiddle Encyclopedia.