Colonization of Mars facts for kids 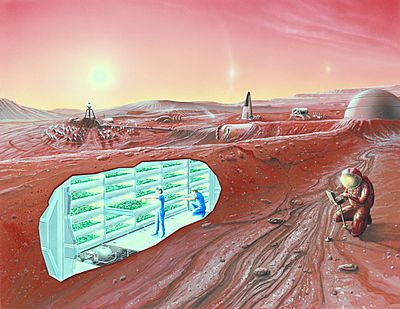 An artist's conception of a human Mars base, with a cutaway revealing an interior horticultural area

Mars is the focus of much scientific study about possible human colonization. Its surface conditions and the presence of water on Mars make it arguably the most hospitable of the planets in the Solar System, other than Earth. Mars requires less energy per unit mass (delta-v) to reach from Earth than any planet except Venus.

Permanent human habitation on a planetary body other than the Earth is one of science fiction's most prevalent themes. As technology has advanced, and concerns about the future of humanity on Earth have increased, the argument that space colonization is an achievable and worthwhile goal has gained momentum. Other reasons for colonizing space include economic interests, long-term scientific research best carried out by humans as opposed to robotic probes, and sheer curiosity.

One of Elon Musk's stated goals through his company SpaceX is to make such colonization possible by providing transport, and to "help humanity establish a permanent, self-sustaining colony on Mars within the next 50 to 100 years".

Many organizations support the colonization of Mars. They have also given different reasons and ways humans can live on Mars. One of the oldest organizations is the Mars Society. They promote a NASA program that supports human colonies on Mars. The Mars Society have set up Mars analog research stations in Canada and the United States. All other organizations include MarsDrive, who wants to help fund settlements on Mars, and Mars to Stay. Mars to Stay advocates settlements on Mars. In June 2012, Mars One released a statement that they believe could help start a colony on Mars by 2023.

All of the early human mission concepts to Mars as conceived by national governmental space programs—such as those being tentatively planned by NASA, FKA and ESA—would not be direct precursors to colonization. They are intended solely as exploration missions, as the Apollo missions to the Moon were not planned to be sites of a permanent base.

Colonization requires the establishment of permanent bases that have potential for self-expansion. A famous proposal for building such bases is the Mars Direct and the Semi-Direct plans, advocated by Robert Zubrin.

Other proposals that envision the creation of a settlement have come from Jim McLane and Bas Lansdorp (the man behind Mars One, which envisions no planned return flight for the humans embarking on the journey), as well as from Elon Musk whose SpaceX company, as of 2015[update], is funding development work on a space transportation system called the Interplanetary Transport System.

2032- As of May 2017, the Mars One website is planning a permanent manned Mars landing in 2032. Concept video published June 2012. A subsequent concept video was released on September 2015.

The Earth is much like its "sister plant" Venus. 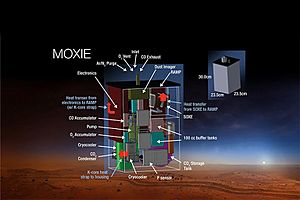 The surface gravity on Mars is 38% of that on Earth. It is unknown if this is enough to prevent weightlessness. Mars is much colder than Earth. Mars surface temperature is −63 °C and a low of −140 °C. The lowest temperature ever recorded on Earth was −89.2 °C, in Antarctica.

There is no liquid water on the surface of Mars. Because Mars is further from the Sun, it takes longer for solar energy to reach the upper atmosphere of Mars. Mars' orbit is more eccentric than Earth's. The atmospheric pressure on Mars is ~6 mbar. This is far below the Armstrong Limit (61.8 mbar) at which people cannot survive without pressure suits.

Since terraforming cannot be expected within the century, humans must have their pressure suits between a third and a whole bar. Mars' atmosphere has carbon dioxide. Mars has a very weak magnetosphere. This means that it does not do a good job getting rid of solar winds. 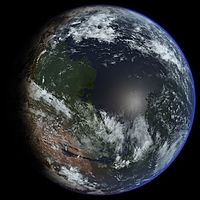 Conditions on the surface of Mars are much closer to habitability than the surface of any other known planets or moons. Other planets such as Mercury has extreme hot and cold temperatures. Venus is very hot and all other planets and moons are very cold. There are some natural places on Earth, where humans have explored, that is similar to the conditions on Mars. The highest altitude reached by a balloon that was carrying humans, was 34,668 meters (113,740 feet), a record set in May 1961. The pressure at that altitude is about the same as on the surface of Mars. Extreme cold in the Arctic and Antarctic match all but the most extreme temperatures on Mars.

It may be possible to terraform Mars to allow a wide variety of living things. In April 2012, it was reported that lichen and bacteria survived. They also showed adaptation and had done photosynthesis during the 34 days in Mars. This mission was maintained by the German Aerospace Center (DLR). On Earth, bacteria are about 80% of the biomass. 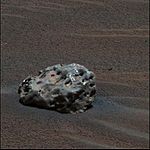 Conditions on the surface of Mars are closer to the conditions on Earth in terms of temperature and sunlight except for the cloud tops of Venus. However, the surface is not hospitable to humans or most known life forms due to greatly reduced air pressure, and an atmosphere with only 0.1% oxygen.

Humans have explored parts of Earth that match some conditions on Mars. Based on NASA rover data, temperatures on Mars (at low latitudes) are similar to those in Antarctica. The atmospheric pressure at the highest altitudes reached by manned balloon ascents (35 km (114,000 feet) in 1961, 38 km in 2012) is similar to that on the surface of Mars.

Mars presents a hostile environment for human habitation. Different technologies have been developed to assist long-term space exploration and may be adapted for habitation on Mars. The existing record for the longest consecutive space flight is 438 days by cosmonaut Valeri Polyakov, and the most accrued time in space is 878 days by Gennady Padalka.

The longest time spent outside the protection of the Earth's Van Allen radiation belt is about 12 days for the Apollo 17 moon landing. This is minor in comparison to the 1100 day journey planned by NASA as soon as the year 2028. Scientists have also hypothesized that many different biological functions can be negatively affected by the environment of Mars colonies. Due to higher levels of radiation, there are a multitude of physical side-effects that must be addressed. Human survival on Mars would require complex life-support measures and living in artificial environments.

The difference in gravity will negatively affect human health by weakening bones and muscles. There is also risk of osteoporosis and cardiovascular problems. Current rotations on the International Space Station put astronauts in zero gravity for six months, a comparable length of time to a one-way trip to Mars. This gives researchers the ability to better understand the physical state that astronauts going to Mars will arrive in. Once on Mars, surface gravity is only 38% of that on Earth.

A study from the Journal of Cosmology by Dr. Nick Kanas states that “Unprecedented factors will affect such a mission. A Mars crew will be tens of millions of miles away from home, engaged in a mission that will last around  2 1⁄2years. Crew members will experience a severe sense of isolation and separation from the Earth” Due to the communication delays, new protocols need to be developed in order to assess crew members' psychological health.

Researchers have developed a Martian simulation called HI-SEAS (Hawaii Space Exploration Analog and Simulation) that places scientists in a simulated Martian laboratory to study the psychological effects of isolation, repetitive tasks, and living in close-quarters with other scientists for up to a year at a time.

There is much discussion regarding the possibility of terraforming Mars to allow a wide variety of life forms, including humans, to survive unaided on Mars's surface, including the technologies needed to do so. 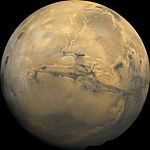 Mars requires less energy per unit mass (delta V) to reach from Earth than any planet except Venus. Using a Hohmann transfer orbit, a trip to Mars requires approximately nine months in space. During the journey the astronauts would be subject to radiation, which would require a means to protect them. Cosmic radiation and solar wind cause DNA damage. 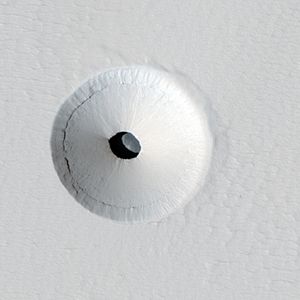 Mars Odyssey found what appear to be natural caves near the volcano Arsia Mons. It has been speculated that settlers could benefit from the shelter that these or similar structures could provide from radiation and micrometeoroids.

Several possible Martian lava tube skylights have been located on the flanks of Arsia Mons. Earth based examples indicate that some should have lengthy passages offering complete protection from radiation and be relatively easy to seal using on-site materials, especially in small subsections.

Many publications have wrote ideas and concerns about a possible human colony on the planet Mars. They include:

All content from Kiddle encyclopedia articles (including the article images and facts) can be freely used under Attribution-ShareAlike license, unless stated otherwise. Cite this article:
Colonization of Mars Facts for Kids. Kiddle Encyclopedia.