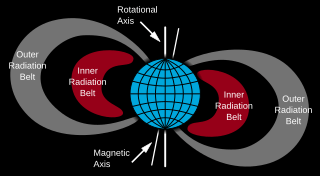 A Van Allen radiation belt is a zone of charged particles which come from the Sun as the solar wind. They are captured and held by the Earth's magnetic field.

Most of the particles that form the belts are thought to come from solar wind and other particles by cosmic rays. By trapping the solar wind, the magnetic field deflects those energetic particles and protects the atmosphere from destruction.

The belts are in the inner region of Earth's magnetosphere. The belts trap energetic electrons and protons. The belts endanger satellites, which must have their sensitive components protected with adequate shielding if they spend much time in that zone. In 2013, NASA reported that the Van Allen Probes had discovered a third radiation belt, which was observed for four weeks. It was destroyed by a powerful, interplanetary shock wave from the Sun.

All content from Kiddle encyclopedia articles (including the article images and facts) can be freely used under Attribution-ShareAlike license, unless stated otherwise. Cite this article:
Van Allen radiation belt Facts for Kids. Kiddle Encyclopedia.