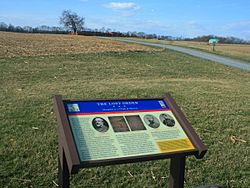 The Best Farm field, where Lee's lost order was found during the American Civil War

Special Order 191 was issued by Robert E. Lee in early September 1862. It was a handwritten order detailing Lee's planned troop movements during his Maryland Campaign intended to win the American Civil War. The document was recovered by Union soldiers and passed on to Major general George B. McClellan. This was a piece of intelligence few battle commanders are ever lucky enough to receive. It gave the details of how Lee had weakened his forces by splitting them up into several columns. It also laid out where each part of his army was to be at any given time. McClellan, usually very slow to act, moved his forces more quickly this time. By the night of September 14, 1862, Lee was no longer following his plan of attack. He was now reacting to McClellan's troop movements. At this point Lee's main problem became how to keep his army from being destroyed.

Following his success at the Second Battle of Bull Run (also called the Second Battle of Manassas), Lee made plans to invade the North. Lee thought that if he took the Civil War to the Union states, a major victory might convince Great Britain and France to support the South. He also thought it would make the North sue for peace. This would insure the Confederate States of America could remain an independent country. Lee led his Army of Northern Virginia into Maryland on September 4, 1862. He concentrated his army at Frederick, Maryland, about 40 miles (64 km) northwest of Washington, D.C. The story of the lost order 191 and the events of early September 1862 revolve around two sheets of paper.

Lee's army was camped near Frederick on September 7. General J.E.B. Stuart's three cavalry brigades had been given the task of forming a screen (protective line) between the encampment and the Union Army to their east. Lee met with his generals suggesting to James Longstreet that he should surround Harpers Ferry Armory and attack the large Union garrison which was threatening their supply lines to their rear. Longstreet objected saying his troops needed rest from the long march. He also pointed out it was a bad idea to split Lee's forces when they were so close to the enemy. If the Union army discovered Lee had weakened his main force, they might attack in force. Once rested, organized and fully supplied, Lee's army could do what it wanted. After the meeting, Longstreet assumed Lee had given up the risky Harpers Ferry scheme. A day or two later, Longstreet entered Lee's tent. He found Lee and General Stonewall Jackson finalizing the plan to attack Harpers Ferry. Longstreet realized the plan had gone ahead without him. Reluctantly, he went along with the plan. On September 9, Lee wrote out the details of the plan in Special Order 191. 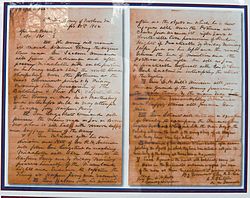 On September 13, while about 2 miles (3.2 km) south of Frederick, Maryland, Corporal Barton W. Mitchell of the 27th Indiana Volunteers (Union Army) found a bundle of cigars wrapped inside some paper. The paper turned out to be Special Order 191. The field had recently been occupied by Confederate General Hill and the order was addressed to General Hill. He gave the order to his sergeant who passed it up the chain of command to General McClellan. The division's adjutant general, Samuel Pittman, was able to confirm it was the handwriting of his former colleague before the war, Robert Chilton, who was Lee's adjutant general. It was in McClellan's hands the same day.

Lee had about 50,000 soldiers to McClellan's 85,000. But McClellan thought Lee had 100,000 troops and was extremely reluctant to engage him. McClellan now had a chance to destroy Lee's Army of Northern Virginia while it was weak and divided, if he acted quickly. This unexpected piece of valuable information led the usually overcautious McClellan to commit his forces on September 14 resulting in the Battle of South Mountain.

All content from Kiddle encyclopedia articles (including the article images and facts) can be freely used under Attribution-ShareAlike license, unless stated otherwise. Cite this article:
Special Order 191 Facts for Kids. Kiddle Encyclopedia.