Sports in India facts for kids 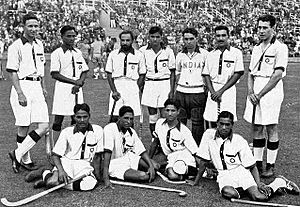 Sports in India are a part of Indian culture.

India has many traditional sports such as kabbadi, kho kho, pehlwani, and gilli-danda. Also, there are sports which were imported from the West such as football, rugby union, cricket, golf, tennis, squash, hockey, Javelin throw, boxing, snooker, and billiards. Sports are popular with both participanta and onlookers.

The history of traditional sports is ancient.

In general, the most popular sports in modern India are the ones which do not include bodily contact. For example, cricket is the most important sport on television.

In the regions of Bengal and Kerala, Association football is very popular.

Main page: India at the Olympics

Indian athletes have competed in 32 Olympic games in 19 countries. The Indian national team has won gold medals in Summer Olympic Games, including

All content from Kiddle encyclopedia articles (including the article images and facts) can be freely used under Attribution-ShareAlike license, unless stated otherwise. Cite this article:
Sports in India Facts for Kids. Kiddle Encyclopedia.