Bar area and part of kitchen

St. Lawrence is a French-Canadian restaurant in the Japantown neighbourhood of Vancouver, British Columbia. It opened in June 2017. Located on the ground floor of a heritage building at 269 Powell St, originally a Japanese general store, St. Lawrence serves a blend of traditional Québécois dishes and French haute cuisine with a focus on rich, hearty fare. The restaurant seats 44, including the six seats at the bar.

The restaurant was designed by Craig Straghetta's Vancouver-based studio Ste. Marie, which designed Poirier's earlier restaurant Ask For Luigi, as well as other Vancouver restaurants such as Kissa Tanto and Botanist. Poirier asked for a space that did not feel designed and looked "like it's always been there", so Straghetta worked to invoke the feeling of a cozy rural home "turned into a restaurant in the middle of the city". The original colour scheme for the restaurant used cream and faded yellow, but was changed to a blue and green palette after the designers sampled the proposed menu. The restaurant features primarily French speaking staff, from Quebec or France. This feature, along with French background music, is intended by the owner to make patrons feel as if they are not in Vancouver. Reviewers have described the environment as resembling those in eateries in Quebec, specifically Montreal or Quebec City.

The building at 269 Powell St. was built in 1905 and originally housed the Komura Bros. General Store, an anchor store for Vancouver's Japanese community. In 1942, the family was forced out of the building when the Canadian government remanded Japanese-Canadians to internment camps following the Canadian declaration of war on Japan at the start of World War II. The exterior of St. Lawrence retains the original tiling outside the front door, including the word "Komura". The metal gates surrounding the door are also original. The door and exterior walls are painted a deep blue-green, and a large cream-and-black sign with the restaurant's name hangs above the door on the building's second floor.

The interior walls are green washed plaster, and the ceiling is light grey. The woodwork and cabinetry is painted glossy royal blue, including a large piece of millwork inspired by antique furniture, which hangs on the back wall. The light fixtures are brass. The restaurant is also decorated with fleur-de-lis symbols. The inside of the restaurant is filled with small antiques and tchotchkes. Most of these are drawn from Poirier's personal collection, but others were sourced from local antique shops. Photographs from his childhood in Saint-Jérôme, Quebec, and pastoral oil paintings are displayed on the walls throughout. A reviewer described the overall impression as being of an old country kitchen crammed with keepsakes accrued over time.

The menu at St. Lawrence leans toward hearty, protein-focused food, which Poirier calls cuisine de campagne ("cuisine of the countryside"). The large portions and focus on rich flavors runs counter to the predominant stereotype of Vancouver cuisine as light and health-focused. The menu deliberately omits poutine in an effort to showcase Quebecois cuisine beyond its most famous dish, instead serving pommes duchesse with cheese curds and gravy. Less common cuts of meat, such as sweetbreads, calf and chicken livers, and tongue, appear both on the regular menu and as special features.

Each meal is preceded by an amuse-bouche of cretons (spiced pork spread) served with sourdough and house-made grainy mustard. Permanent menu items include venison tourtière, mushroom vol-au-vent, and a daily pâté en croûte. Feature items are often more elaborate, for example lobster Newberg, cailles en sarcophage ("quails in a sarcophagus"), and a ling cod fillet for two. Many of the dishes are revived classics rarely found in modern restaurants.

St. Lawrence makes use of sauces ranging from cream and butter-based sauces to lighter gravies like au jus. Since most dishes are paired with their own particular sauce, the restaurant can have as many as ten different sauces cooking each night. The grilled pork chop, for example, is dressed with sauce charcutière ("butcher's sauce"), and the ling cod with a saffron sauce.

Like the main courses, the desserts are old-fashioned and served in large portions. The signature desserts are a lattice-topped classic sugar pie and a rice pudding with salted caramel, which comes with small pastries called pets de sœurs ("nun's farts").

The bar serves exclusively French wines, a short list of classic cognac-based cocktails, and various beers and ciders including Labatt 50, regarded as a staple beer for the working class in Quebec. A small selection of Japanese whisky is also available, a nod to the restaurant's location in historic Japantown. 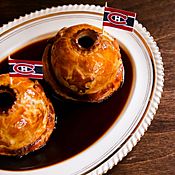 The plating style at St. Lawrence is simple and unpretentious. Poirier told the Vancouver Sun that "smart presentation doesn't matter to me—food must be delicious". The presentation of many dishes incorporates playful touches inspired by the culture of Quebec. The tourtière is served with a miniature flag of the Montreal Canadiens hockey team, a cultural icon for the Quebecois, and a miniature bottle of Heinz Tomato Ketchup on the side. The oreilles de crisse (deep-fried pork rinds) are served in a maple syrup can, an object which has been described as "Canada in a can".

In January 2020, St. Lawrence held a series of "cabane a sucre" dinners, with a menu modelled after the traditional fare served at Quebecois sugar shacks during the maple syrup harvesting season. During these dinners, the restaurant was set up for family-style long table dining, and used checkered tablecloths to imitate the look of sugar shack diners.

In April 2020, dine-in restaurants in British Columbia were subjected to a temporary mandatory closure order because of the coronavirus pandemic. St. Lawrence re-opened for a take-out-only service called St. Lawrence á La Maison, with partial proceeds donated to charity.

All content from Kiddle encyclopedia articles (including the article images and facts) can be freely used under Attribution-ShareAlike license, unless stated otherwise. Cite this article:
St. Lawrence (restaurant) Facts for Kids. Kiddle Encyclopedia.