St Albans is a small and historic village on the Macdonald River, New South Wales, Australia, about 94 kilometres (65 mi) north west of Sydney. At the 2011 census, St Albans and the surrounding area had a population of 305 people.

The "Village of Macdonald" was surveyed in 1837 but renamed St Albans on 26 January 1841 after the City of St Albans in Hertfordshire, England, north of London.

In the early part of the colonial settlement of New South Wales, the Macdonald Valley was an important agricultural area because of its accessibility by water. However, with the development of railways and extensive agricultural development west of the Great Dividing Range, the Macdonald Valley became less important and declined to become a remote backwater. The valley is often referred to by the locals as the "Forgotten Valley".

St Albans is on the banks of the Macdonald River, a tributary of the Hawkesbury River which is about 15 kilometres (9.5 mi) to the south. The village was opened for settlement in 1842 largely because it had become an important stopping point for farmers and others in the area wanting to ship their goods down the Hawkesbury River to Sydney. St Albans was at the navigational upper limit of the Macdonald River. This upper portion of the river has since been drastically reduced to navigation with sand and silt.

Two (free) 24-hour car ferries provide access to St Albans from the Sydney region along roads following the old goat and horse tracks on either side of the Macdonald. Both roads meander (one partly unsealed) through rich country and farms of cattle, melons, orchards and corn. On either side of the river are historic homes and spectacular sandstone towering hills. A route is through Wisemans Ferry township and north across the Hawkesbury via Wisemans ferry, then follow the eastern side of the Macdonald. The first bridge to cross the river links the two roads at St Albans. Another route to St Albans is to turn left just before entering Wisemans Ferry township, cross the Hawkesbury via the Webbs Creek Ferry, then follow up the western side of the Macdonald to the village.

The Court House is perched on wooded slopes of Hawkesbury sandstone, high above the beautiful Macdonald River and St Albans. The building, originally consisting of a courtroom, police station and lock-up, now offers comfortable overnight and holiday accommodation. The original prisoners' exercise yard is now a recreational area. The two original cells have been retained as unique bathrooms. The building is recognised by the National Trust and has a City of Hawkesbury heritage classification.

The inn occupies a picturesque position facing the river and is in an excellent state of preservation. In July 1842 the first land sales were held in St Albans. John Sullivan of Wollombi purchased seven allotments on which he built the Settlers Arms Inn. It was constructed at a cattle drover's camp on the limit of navigation on the Macdonald River. It still trades as "a purveyor of conversation, beer, and accommodation". There is some confusion as to the construction date. 1836 was the year the license was issued, number. 36/10, but a report by the Hawkesbury correspondent in the Sydney Morning Herald on 1 March 1848 reads: "The township which a few years ago was marked out upon this river, has been built on by only one individual, Mr. Sullivan. He has erected a very reasonable stone house two stories high, which we understand he intends to open as an Inn." [Implying that it was not open then.].

The newly restored 1837 cottage took 8 years to build and 2 years to restore. It has vertical timber slab, wattle and daub construction with its calico ceilings under a shingle roof. Price Morris, an emancipist/farmer took up the 50 acre (20 hectare) property grant in 1837. In the 1830s the area was settled by Welsh Methodists and the Price Morris cottage became the centre for Methodist meetings and worship. A Methodist church was built in St. Albans but the cottage continued as an occasional meeting place until the late 1960s. One of preachers was the grandfather of the late Sir Alan Walker, founder of the Central Methodist Mission. 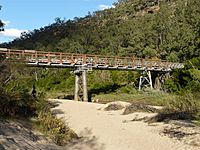 There were devastating floods in 1867, 1889, 1913, and particularly 1949. The town lies fifty feet above the riverbed and the floor of the bridge is forty feet from the sand. In the 1889 flood the bridge was covered, the Court House was not washed away but the Police quarters were. The water rose to the eaves of Jurds Hotel (Settlers Arms Inn) and left a hole seven feet deep in front of it. The old house was of stone, but some of it washed away. The floodwaters rose to the veranda eaves and washed away five houses, and another newly built on the other side of the river.

All content from Kiddle encyclopedia articles (including the article images and facts) can be freely used under Attribution-ShareAlike license, unless stated otherwise. Cite this article:
St Albans, New South Wales Facts for Kids. Kiddle Encyclopedia.