St Chad's Church occupies a prominent position in Shrewsbury, the county town of Shropshire. The current church building was built in 1792, and with its distinctive round shape and high tower it is a well-known landmark in the town. It faces The Quarry area of parkland, which slopes down to the River Severn. The church is a Grade I listed building.

The motto of the church is "open doors, open hearts, and open minds". This indicates the aspiration of the church to be a welcoming church, involved in the community, and on a collective journey seeking after God.

Music is a strong tradition at St Chad's. The church has a robed choir which leads the music at many of the services. The church organ is a large three-manual pipe organ, built by Norman and Beard in 1904 and restored by Nicholson & Co Ltd in 1963 and Harrison & Harrison in 1985 and more recently in 2011. The church hosts lunchtime organ recitals and other concerts.

Charles Darwin was baptised in St Chad's church in 1809, and as a young boy attended the church with his mother Susannah.

The headstone prop of Ebenezer Scrooge (played by George C. Scott) that was used in the 1984 film A Christmas Carol is still present in the now-disused churchyard. According to the Shrewsbury Town Crier, Martin Wood, the headstone is not a "prop" but an actual period headstone, on which the original inscription had deteriorated to the point that the movie production people asked the church if they could use it and inscribe the "Ebenezer Scrooge" words on it. You can still see some of the original inscription on the bottom part of the stone. Among those actually buried in the churchyard was Shrewsbury architect Edward Haycock, Sr.

In 2010, the church became a member of the Greater Churches Group. 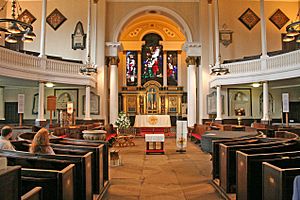 Inside St Chad's Church, looking towards the sanctuary 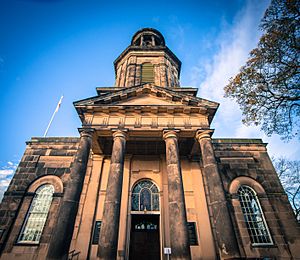 Palladian style entrance to the church

The present building replaced an earlier church, dedicated to St Chad, situated near College Hill; this was a 13th-century building which was largely destroyed when the central tower collapsed in 1788. All remaining of the earlier building is a side chapel surrounded by a disused churchyard which also contains an exposed crypt.

Scottish architect George Steuart was commissioned to build a new church, and he submitted several preliminary designs. Due to a misunderstanding, Steuart went on to complete a circular plan which was not the Parish Church Council's preferred design; however, time was limited, and this was the design which was built.

The foundation stone was laid on St Chad's day, 2 March 1790. The church was built of white Grinshill stone. The building work was supervised by John Simpson (who later worked on several projects with Thomas Telford, including the Pontcysyllte Aqueduct). Internally, the gallery was supported by slender cast iron pillars, an early example of cast iron used for this purpose; they were made by William Hazledine, a pioneering ironmaster who had a foundry in Shrewsbury. (There are memorials to Simpson and Hazledine on either side of the sanctuary arch of the church.)

The sanctuary window is a copy in stained glass of a triptych by Rubens in Antwerp Cathedral; it was made in the 1840s by David Evans, a local stained glass artist. The original pulpit, which obscured the altar, was removed in 1888; it was replaced by a copper and brass pulpit in Arts and Crafts style, placed to one side and giving a clearer view of the Sanctuary.

The entrance hall has many memorials relating to the 53rd Regiment of Foot, and its successor regiment the King's Shropshire Light Infantry (KSLI) including:

In 1913 a vestry off the right hand side of the entrance lobby was converted to a chapel of St Aidan, in memory of former vicar Richard Eden St Aubyn Arkwright. In 1951, at about same time as a second storey was added to another vestry the opposite side of the lobby, funds were raised to convert this chapel into a regimental chapel for the KSLI, resulting in an enlarged apse, new altar, rood screen, rails and chairs. In 1952 and 1966 Regimental colours were laid up here.

After World War I, the church's main sanctuary was refitted with a light oak reredos, designed by Cecil Lightwood Hare, new altar and wainscot as a memorial to the parish fallen of the war, repainted in gold leaf and cobalt in 1951.

The graveyard contains a grave inscribed Ebenezer Scrooge: this dates from the making of the 1974 film version of A Christmas Carol starring George C. Scott and was used for the scene where Scrooge finds his own grave.

All content from Kiddle encyclopedia articles (including the article images and facts) can be freely used under Attribution-ShareAlike license, unless stated otherwise. Cite this article:
St Chad's Church, Shrewsbury Facts for Kids. Kiddle Encyclopedia.