The Parish Church of St Luke, Chelsea, is an Anglican church, on Sydney Street, Chelsea, London SW3, just off the King's Road. Ecclesiastically it is in the Deanery of Chelsea, part of the Diocese of London. It was designed by James Savage in 1819 and is of architectural significance as one of the earliest Gothic Revival churches in London, perhaps the earliest to be a complete new construction. St Luke's is one of the first group of Commissioners' churches, having received a grant of £8,333 towards its construction with money voted by Parliament as a result of the Church Building Act of 1818. The church is recorded in the National Heritage List for England as a designated Grade I listed building. The gardens of St Luke's are Grade II listed on the Register of Historic Parks and Gardens. 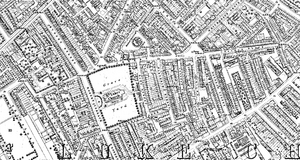 In the early 19th century Chelsea was in the process of expanding from a village to an area of London. St Luke's was built as a new, more centrally located replacement for the existing parish church, now known as Chelsea Old Church, which until then was also known, though unofficially, as St Luke's. This was initially a chapel of ease to the new building following its opening. The new church was the idea of the rector of Chelsea, the Hon. and Revd Gerald Wellesley, brother of the 1st Duke of Wellington, who held his office from 1805 to 1832, seeing the consecration of the church in 1824.

In 1819 Savage's plans for the church were chosen from among more than forty submissions. Designed in imitation of the Gothic churches of the fourteenth and fifteenth centuries, the church is built of Bath stone and has a stone vault supported externally by flying buttresses. It was, according to Charles Locke Eastlake "probably the only church of its time in which the main roof was groined throughout in stone". Sir John Summerson notes similarities to Bath Abbey, King's College Chapel, Cambridge, and the tower at Magdalen College, Oxford, all masterpieces of the Perpendicular style, although some of the detailing refers to earlier Gothic styles. Savage originally intended the tower to have an open spire, like that of Wren's St Dunstan-in-the-East, but this was forbidden by the Board of Works. Summerson praises "an air of competence and consequence about the design which makes one respect its architect very much. The interior has real dignity and the fittings are carefully detailed". Eastlake, writing in the 1870s, by which time Gothic Revival architects had developed a far better grasp of the historical styles, criticised the building for its "machine made look" and "the cold formality of its arrangement".

St Lukes's was an ambitious building, costing £40,000 and designed to accommodate 2,500 people. With Sir John Soane's Holy Trinity Church, Marylebone Road, it was the most expensive Commissioner's church in terms of its total cost.

The organ installed in the new church, with thirty-three sounding stops, was built by W. A. A. Nicholls but completed by Gray. It was rebuilt, using the original case and many of the pipes, by John Compton in 1932.

The interior of the church was originally arranged as a "preaching house" with a large pulpit, a small altar, and galleries over the aisles. The arrangement was altered in the 1860s, but the galleries over the nave aisles were retained. Unusually for an Anglican church of the period, the St Luke's soon acquired a large altarpiece of the Deposition of Christ by James Northcote.

Originally sharing its parish with Chelsea Old Church, in 1839 a further church, Christ Church, just off Flood St nearby, was added as a chapel of ease. Between 1860 and 1986 Christ Church was a separate parish, but is now re-united with St Luke's as the parish of St Luke and Christ Church, Chelsea, though many aspects of parish business are done separately for the two churches.

Charles Dickens was married at St Luke's to Catherine Hogarth, who lived in Chelsea, on 2 April 1836, two days after the publication of the first part of the Pickwick Papers, his first great success. The artist Robert Gill was married on 25 May 1825, shortly before returning to India, where he spent the rest of his life, much of it copying the paintings of the Ajanta Caves. The architect William Willmer Pocock married here in 1840. The parents of Robert Baden-Powell, the founder of the Scouting movement, were married on 10 March 1846, for the third time in the case of his father Baden Powell, a distinguished mathematician and theologian. Other marriages have included William Hewson the Victorian theological writer, in 1830, John Prideaux Lightfoot, later Vice-Chancellor of the University of Oxford, in 1835, and the parents of Harry Arthur Saintsbury in 1854. The father of the authors Charles Kingsley and Henry Kingsley became the rector in 1836, when his sons were 18 and 6 respectively. Other clergy serving the parish have included Derek Watson and Ross Hook as Rector and Hugh Otter-Barry as curate.

The position of organist and choirmaster has been held by several notable musicians, often as a stepping-stone to cathedral positions. Two organists were composers who also wrote the tunes for hymns: Sir John Goss who wrote Praise, My Soul, the King of Heaven and the carol See, Amid the Winter Snow, and John Ireland. Henry Forbes was another 19th-century composer who was organist. More recently Denis Vaughan and Jeremy Filsell have been Directors of Music.

The Earls Cadogan, who owned the land around the church, have always been the patrons of the church, and there is a wall monument to Lt Colonel Henry Cadogan, who died in 1813 at the Battle of Vittoria, by Sir Francis Chantrey. Two actors and actor-managers who were famous in their day are buried in the churchyard: William Blanchard, known for comic roles, and Daniel Egerton. Both died in 1835. James Savage, the architect of the church, is also buried there.

St Luke's also houses the memorial chapels of the Punjab Frontier Force and 3rd Gurkha Rifles of the British Indian Army. The screen panels decorated with regimental badges were engraved by Josephine Harris.

All content from Kiddle encyclopedia articles (including the article images and facts) can be freely used under Attribution-ShareAlike license, unless stated otherwise. Cite this article:
St Luke's Church, Chelsea Facts for Kids. Kiddle Encyclopedia.