Sterling is a Home Rule Municipality that is the county seat and the most populous city of Logan County, Colorado, United States. The city population was 18,211 at the 2010 census.

According to the United States Census Bureau, the city has a total area of 6.9 square miles (18 km2), all of it land. 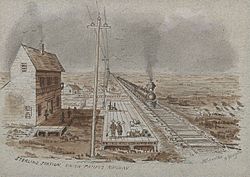 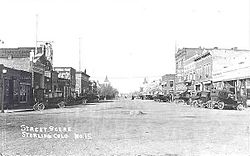 Sterling's Main Street in the 1920s, looking northwest from the railroad tracks.

A post office called Sterling has been in operation since 1874. The community was named for Sterling, Illinois, the native home of a railroad official.

Just a few miles northeast of Sterling is located the North Sterling State Park, situated on the North Sterling Reservoir, a man-made lake fed by waters from the South Platte River. This new state park has three state of the art boat ramps, and three modern camping areas with over 150 camping sites, as well as multiple picnicking sites. The park is famous for its superb swimming, boating, waterskiing, camping, and fishing. 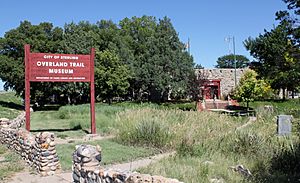 The Overland Trail Museum in Sterling

The Overland Trail Museum, located east of Sterling near Interstate 76, houses an eclectic mix of historical items in the main building, which resembles an early fort, as well as a restored local one-room schoolhouse and other restored historical buildings. Museum admission is three dollars, and picnic grounds are adjacent.

The largest attraction at the pool is the double flumed slide, complete with a translucent blue speed slide about 130 feet long and one open flume slide about 220 feet long. Picnic tables and chairs can accommodate over 300 patrons and the seven shade structures provide plenty of protection from the sun's ultra violet rays. http://www.sterlingcolo.com/pages/dept/plr/reccenter.php

According to the Köppen Climate Classification system, Sterling has a semi-arid climate, abbreviated "BSk" on climate maps.

Sterling is also served by railroads, although only freight carriers serve the town. The main rail operator is Burlington Northern Santa Fe (BNSF), but other operators, like Union Pacific, serve Sterling as well. The closest Amtrak station is located in Fort Morgan, about 47 miles (76 km) away.

Scheduled bus service is offered by Black Hills Stage Lines with service to Ft. Morgan and Denver in Colorado, as well as number of cities in Nebraska including North Platte, Kearney, and Omaha.

There were 4,604 households out of which 30.6% had children under the age of 18 living with them, 46.2% were married couples living together, 10.8% had a female householder with no husband present, and 39.4% were non-families. 34.1% of all households were made up of individuals and 14.7% had someone living alone who was 65 years of age or older. The average household size was 2.34 and the average family size was 3.03.

All content from Kiddle encyclopedia articles (including the article images and facts) can be freely used under Attribution-ShareAlike license, unless stated otherwise. Cite this article:
Sterling, Colorado Facts for Kids. Kiddle Encyclopedia.