Story is a census-designated place (CDP) in Sheridan County, Wyoming, United States. As of the 2010 census, the CDP population was 828.

History of the region

The region around Story was part of the history of the American Frontier and the Old West, and of the conflicts between early settlers and the Plains Indians. The historic Bozeman Trail passed nearby in the mid-1860s, and Fort Phil Kearny, now a State Historic Site, lies just 5 miles south of town. Fort Sheridan was just to the north, near what is now the city of Sheridan.

Fort Phil Kearny, known to the Plains Indians as the "hated post on the Little Piney", played an important role in Red Cloud's War (1866-1868), and the area around the fort was the site of the Fetterman massacre and the Wagon Box Fight. The Fetterman Fight (with 81 men killed on the U.S. side) was the worst military defeat suffered by the U.S. Army on the Great Plains, until the Battle of the Little Bighorn ten years later. 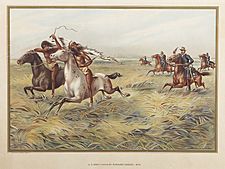 The 1866 Fetterman Fight marked a key victory of the Lakota, Cheyenne, and Arapaho Indians over soldiers of the United States Army, and the 1867 Wagon Box Fight involved Lakota Sioux and soldiers from nearby Fort Phil Kearny. Fort Phil Kearny, including the nearby sites of the Fetterman engagement and the Wagon Box Fight, was designated a National Historic Landmark in 1960.

With the advent of the automobile in the early 1900s, the area around Story became, and has remained, a popular destination in Wyoming for tourists, Boy Scout troops and others for camping, fishing, and other outdoor recreational activities. 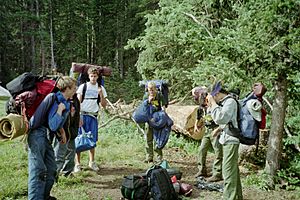 Banner lies three miles to the northeast, and the Bighorn Mountains (and Bighorn National Forest) are to Story's west. The town is accessible via US Route 87 (cosigned with Wyoming Highway 193).

According to the United States Census Bureau, the census-designated place has a total area of 7.1 square miles (18.46 km²), all of it land. 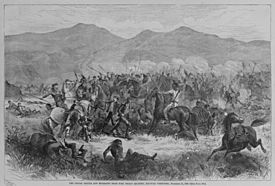 There were 420 households, out of which 20.5% had children under the age of 18 living with them, 57.1% were married couples living together, 4.3% had a female householder with no husband present, and 35.2% were non-families. 30.0% of all households were made up of individuals, and 13.1% had someone living alone who was 65 years of age or older. The average household size was 2.11 and the average family size was 2.56. 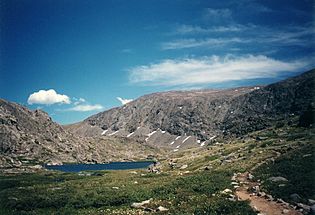 Above the timberline
in the Bighorns

Among others, civic services and organizations available to residents in Story include:

The Story Recycling Group is part of a Sheridan County and City of Sheridan test project for improving and increasing recycling in the County, and to save on use of county landfill space and community waste disposal costs.

The Story Community Church/Pastor John Constantine 307-217-0393 A family Community Church where all people are welcome. Supports missions through the Cooperative Program of the Southern Baptist Convention. Find us on Facebook!

The Wyoming State Game & Fish Department operates a fish hatchery and visitor center, which is open to the public, on South Piney Creek, 2 miles west of Story on Fish Hatchery Road - State Route 194. 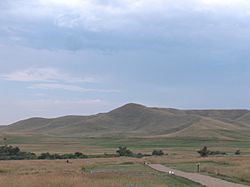 In the late 1990s, a section of US 87 between Buffalo and Sheridan near Pilot Hill was closed due to recurring landslides, and State Route 193 began being used as an alternate route. The State of Wyoming petitioned the American Association of State Highway and Transportation Officials (AASHTO) to officially reroute US 87 over Highway 193, but AASHTO denied the petition. Since then, an officially designated detour for US 87 has followed Highway 193 through Story, and it appears unlikely US 87 will be reconstructed in the foreseeable future due to additional, and recurring landslides in the area, as well as the potential costs. 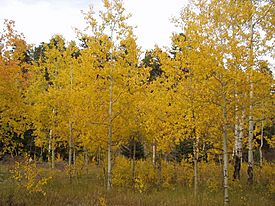 Autumn in the Bighorn Mountains

Story has a public library, a branch of the Sheridan County Public Library System.

All content from Kiddle encyclopedia articles (including the article images and facts) can be freely used under Attribution-ShareAlike license, unless stated otherwise. Cite this article:
Story, Wyoming Facts for Kids. Kiddle Encyclopedia.