Stow Fair was an English medieval fair inaugurated in 1233. The Prior of Sempringham was granted permission in 1268 to hold this annual fair, from 23 to 25 June, confirming an earlier charter. The fair continued until living memory, being run as a horse fair until 1954.

It seems likely that earlier fairs were held on the same days, one of which is the feast day of St Ætheldreda, long associated with the site. Historian Graham Platts' view is that there should be scepticism over a belief that the fair developed from earlier summer solstice rites.

The District Council have erected an information board at the site, with historical text and a photograph of the horse fair in 1908. 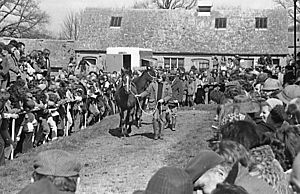 Stow Fair was held at the now Stow Green Hill, next to Mareham Lane between Sleaford and Rippingale via Threekingham. This, is thought to be the route of a Roman Road aligned with King Street.

The location is on the edge of the Limestone hills, looking North over the fen country toward Sleaford. It is toward the end of a small ridge of high ground pushing east into the fen from Walcott. The field is around 108 feet (33 m) above sea level. It would have been a commanding position at the time.

Few Roman remains have been found along the route of Mareham Lane.

A fenced field at the corner of Mareham Lane and Stow Lane bears a notice board with historical information. The land is owned by the Crown Commissioners and farmed under a tenancy. Pedestrian access to the site is permitted, although metal detection is forbidden. Originally the fair could have extended over a larger area, and the field is a Scheduled Ancient Monument.

The Domesday Book of 1086 records two churches in Threekingham; St Peter and St Mary. The church of St Mary was at Stow Green. Funerary remains have been found at Stow Green date back to the 11th- and 12th-century, and the church survived until the 18th century. It is possible that it was the site of an Early Medieval nunnery, founded in the late 7th century by St Werburgh and dedicated to St Ætheldreda. It was probably destroyed by the Danes c.870.

'Stow' is well known to be a place name denoting a holy place, or a burial place. According to Eilert Ekwall, "Old English 'stow' is recorded in senses such as 'place', 'inhabited place', 'holy place, hermitage, monastery', probably 'church'."

All content from Kiddle encyclopedia articles (including the article images and facts) can be freely used under Attribution-ShareAlike license, unless stated otherwise. Cite this article:
Stow Fair, Lincolnshire Facts for Kids. Kiddle Encyclopedia.