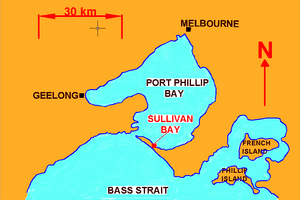 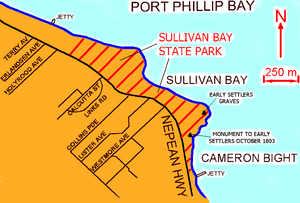 Sullivan Bay is the site of the first official European settlement in Victoria, Australia. It is a very small bay near Sorrento, Victoria. It is close to the entrance of Port Phillip Bay, 60 km (37 mi) south of the city of Melbourne. In 1802, Governor Philip Gidley King in Sydney had written to Lord Hobart, Minister in charge of the colonies, in London, saying that Britain should start a settlement at Port Phillip Bay. King thought it would be good area for fishing and sealing. He was also worried that the French might settle in the area and then would control Bass Strait. Lieutenant John Murray had explored Port Phillip Bay in 1802 and thought that the Sorrento area would be a good spot to start a settlement.

Lieutenant Governor David Collins was put in charge of starting the new settlement. He took 307 convicts, some with wives and children, 51 soldiers, 17 free settlers, some with wives and children, and a government staff of 12, and a clergyman, the Reverend Knopwood. The group of more than 400 people left England in April 1803, in the store ship “Ocean” and the convict ship “Calcutta.”

The two ships sailed to Tenerife in the Canary Islands, Rio de Janeiro in Brazil, Capetown in South Africa, and arrived at Port Phillip Bay on 6 October and 8 October 1803. Only 14 people died on the trip. Collins was unable to find a good place to land that had drinking water and good soil. On 13 October 1803, he landed at Sullivan’s Bay, which he named after the Under Secretary of the Colonial War Department.

The new settlers were able to get water by putting wooden barrels into the sand, and letting the water in the ground soak into them. It was salty and not nice to drink. The soil was very sandy and not suitable for farming. There were very few trees suitable for cutting up into building timber. The sandy ground meant that heavy items could not be carried in a wagon, which would be stuck in the sand, but had to be dragged instead. The small entrance to the bay made it difficult for sailing ships to get in or out safely. The tools brought from England, such a spades, hoes and axes, were very badly made and broke easily. Coscape. He had hoped to increase the food supply with fresh fish and kangaroos, but they were not able to catch any.

Male convicts were given a set of clothes in October 1803 which included:

The food ration each week was:

Women were to be given 2/3 of that amount, children half the amount, and small children under 5 years, ¼ of the ration.

A convict printer, Robert Walsh printed the orders and instructions for the settlement on a small printing press. During the time of the settlement 43 such orders were printed.

Collins told the convicts not to go into the water to wash because of the danger from hungry sharks and stingrays. Some tried to escape by walking overland to Sydney. They soon gave up and went back to the settlement. Settler, John Skilton, died on 17 October 1803. On 25 November 1803, the first child, William James Hobart Thorne, was born to a soldier, Sergeant Thorne and his wife. One child of convict parents was John Pascoe Fawkner, who returned to start the settlement of Melbourne in 1835.

In November, Collins sent the “Ocean” to Sydney with a letter asking King to let him abandon the settlement, and move it to either Port Dalrymple or the Derwent River in Van Diemen's Land. The “Ocean” came back in December and Collins wasted no time in getting most of the convicts and settlers packed up. He gave an order that convicts had to work on Sundays to make sure the group was ready to leave as soon as possible. On 30 January 1804, the “Ocean” set sail for the Derwent River. Lieutenant William Sladden was left behind in charge of a small group. The “Ocean” returned and on 20 May 1804, the settlement was abandoned.

Three people were left behind after the settlement was abandoned, two were escaped convicts and one was a runaway soldier, William Buckley. When John Batman came to settle in Victoria 30 years later, he found Buckley living with an aboriginal tribe. The only sign of the settlement now is four graves at Sullivan Bay, and the remains of a water barrel in the Latrobe Library collection.

All content from Kiddle encyclopedia articles (including the article images and facts) can be freely used under Attribution-ShareAlike license, unless stated otherwise. Cite this article:
Sullivan Bay, Victoria Facts for Kids. Kiddle Encyclopedia.