Sumner is a town in Oxford County, Maine, United States. Sumner is included in the Lewiston-Auburn, Maine metropolitan New England city and town area. The population was 994 at the 2020 census. The town includes the villages of West Sumner and East Sumner.

Originally called West Butterfield Plantation, it was first settled in 1783 by Noah Bosworth from Plympton, Massachusetts. Most of the early settlers were Revolutionary soldiers from Plymouth County, Massachusetts. The town was incorporated by the General Court on June 13, 1798 and named for Increase Sumner, who was then the governor of Massachusetts.

Despite an uneven and somewhat broken surface, the town's principal occupation became agriculture. The two branches of the Nezinscot River provided water power for mills. By 1859, when the population was 1,151, Sumner had three sawmills, two gristmills, two shingle mills, a starch factory, a clover mill (to clean clover seeds, food for cattle), and a powder mill. The Rumford Falls and Buckfield Railroad opened a station near East Sumner in 1878. 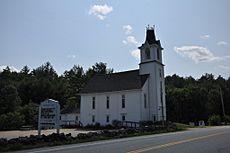 There were 383 households, of which 26.9% had children under the age of 18 living with them, 59.3% were married couples living together, 4.7% had a female householder with no husband present, 5.5% had a male householder with no wife present, and 30.5% were non-families. 21.9% of all households were made up of individuals, and 9.7% had someone living alone who was 65 years of age or older. The average household size was 2.45 and the average family size was 2.85.

All content from Kiddle encyclopedia articles (including the article images and facts) can be freely used under Attribution-ShareAlike license, unless stated otherwise. Cite this article:
Sumner, Maine Facts for Kids. Kiddle Encyclopedia.