Paris is a town in and the county seat of Oxford County, Maine, United States. The population was 5,179 at the 2020 census. The census-designated place of South Paris is located within the town. Because the U.S. Post Office refers to the entire town as South Paris, the town as a whole is commonly referred to as South Paris. The main exception is the area known as Paris Hill, which is a scenic historic district popular with tourists. On May 30, 2019, the town declared itself to be a second amendment sanctuary. 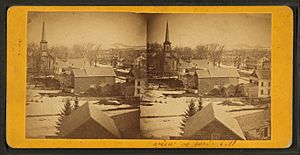 It was granted by Massachusetts on June 11, 1771 to Captain Joshua Fuller of Watertown, Massachusetts and 59 others (or their heirs) for service during the French and Indian Wars. It was the second attempt to repay the soldiers, because their first grant in New Hampshire, made on November 24, 1736 and called Township Number Four, was deemed invalid because of a prior claim by the heirs of John Mason. The land in Maine would retain the name Township Number Four.

It was first settled near the center of the town in 1779 by Lemuel Jackson, John Willis and their families. Organized as Number Four Plantation, it was incorporated as Paris on June 20, 1793. At the establishment of Oxford County in 1805, Paris was designated its county seat and developed into a thriving community. It was noted for scenic beauty and excellent pasturage, including some of the state's best livestock and dairy farms. It also had many large apple orchards. The village of Paris Hill was established at an elevation of 820 feet (250 m) above sea level, with views of Mount Chocorua and Mount Washington in the White Mountains. The Paris Hill Historic District, added to the National Register of Historic Places in 1973, has fine examples of Federal and Greek Revival architecture. The old Oxford County Jail, built of granite in 1822, was given in 1902 to the Paris Hill Library Association, and is now the Hamlin Memorial Library and Museum.

The Little Androscoggin River provided water power for mills at South Paris, to which the town center shifted after the arrival of the Atlantic and St. Lawrence Railroad on June 8, 1850. Industries included a gristmill, sawmill, shingle mill, planing mill, iron foundry and machine shop. In the 1890s, the county seat moved here from Paris Hill to be near the train station. Manufacturing would fade with the Great Depression, but South Paris remains the commercial part of the town. West Paris, which includes North Paris, was set off and incorporated in 1957.

According to the United States Census Bureau, the town has a total area of 40.97 square miles (106.11 km2), of which, 40.77 square miles (105.59 km2) of it is land and 0.20 square miles (0.52 km2) is water. Paris is drained by the Little Androscoggin River. The town is located on a bed of pegmatite in which many semi-precious gems and rare stones can be found, including beryl, garnet, tourmaline, amethyst and smoky quartz. 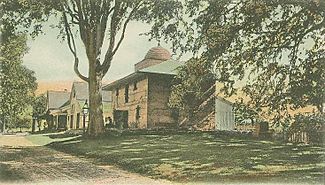 All content from Kiddle encyclopedia articles (including the article images and facts) can be freely used under Attribution-ShareAlike license, unless stated otherwise. Cite this article:
Paris, Maine Facts for Kids. Kiddle Encyclopedia.