Tan Hill is a high point on the Pennine Way in the Richmondshire district of North Yorkshire, England. It lies north of Keld in the civil parish of Muker, near the borders of County Durham and Cumbria, and close to the northern boundary of the Yorkshire Dales National Park. It is in an isolated location, with the nearest town of Kirkby Stephen being an 11-mile (18 km) drive away.

The Upper Howgate Edge Grit is a coarse-grained sandstone within the Pendleian, the lower subsystem of the Carboniferous structure. Found in the peaks of the highest fells of North Yorkshire, the shale layer containing coal lies above it. The shale under the northwest region is called the Tan Hill seam, and was worked from the 13th century until the early 1930s.

The first records of coal being produced are from 1384, when locally worked shallow shafts produced coal for Richmond Castle. The poor-quality coal produced a dirty, dusty fuel but when mixed with peat it gave a good glow, and could smoulder overnight until revived in the morning. Before the start of the Industrial Revolution, the easily accessible upper seams were mainly worked out, requiring investment in deeper shafts. By the 17th century the poor-quality coal was locally converted in simple beehive kilns into coke – known locally as "cinders" – which was used in lead and iron smelting.

With modern means of transport having encroached on the valley, the local miners defied the 1926 General Strike. When better coal became more easily available, the local coal became less desirable and the last mine closed in 1929. Locals worked the residual upper seams by hand until the mid-1930s. 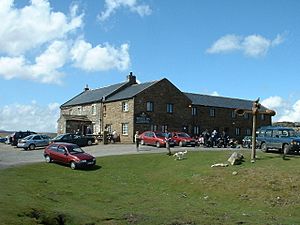 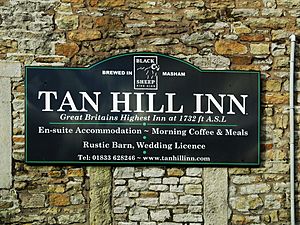 The Tan Hill Inn is the highest inn in the British Isles at 1,732 feet (528 m) above sea level. According to the Guinness Book of World Records, it is slightly higher than the Cat and Fiddle Inn in the Peak District, which is at 1,690 feet (520 m).

The building dates to the 17th century, and during the 18th century was used as a hostelry by workers digging coal pits, which is reflected in its earlier name, The Kings Pit. It is unusual for its isolation, but it was previously surrounded by miners' cottages. In addition to miners, farmers and pedlars, frequent visitors at the inn included drovers leading cattle to the coal pits.

After the closure of the last mine in 1929, and demolition of the associated cottages in the early 1930s, the pub remained open due to the patronage of local farmers and the development of the motor car.

From 1974, boundary changes moved it into County Durham, but this was reviewed in 1987 after much protest, and it reverted to within the Yorkshire boundary. In 1995, the Tan Hill Inn became the first public house in the UK to be granted a licence to hold weddings and civil ceremonies, after new laws were established to allow couples to marry in places other than churches or register offices.

The pub is a free house and has served a range of beers from the Black Sheep and Theakston breweries. Visiting bands have included Arctic Monkeys, Mark Ronson and British Sea Power.

In May 2007, Kentucky Fried Chicken threatened legal action against the Tan Hill Inn for trademark infringement over the use of the term "Family Feast" on the inn's Christmas Day menu, but on 10 May 2007 KFC confirmed that it would not be pursuing the case.

Revellers celebrating New Year's Eve at the pub on 31 December 2009 were unable to leave the pub for three days as they were snowed in.

In July 2017 the pub was put up for sale by landlady Louise Peace who had run it for 13 years with her husband Mike. Since mid-2018, the owners have been Andrew Hields and Mike Kenney. They planned to install glass-roofed pods to allow guests to view the Aurora borealis (Northern Lights) from their beds. They were also considering a major restoration: adding more showers and cleaning facilities to the three bunk rooms, as well as charging points and privacy screens; the rooms would be more comfortable and offer more character after the renovations. A report at the time indicated that the owners planned to open the barn as a carvery and to add a second bar. In 2019, the facility was encouraging camper vans and caravans and campers to stay for a moderate nightly fee, and a venue for live music acts was in operation. The guest rooms were refurbished in 2019, and electrical work completed; the other plans for improvements were still in the works. Additional plans for the future included a rustic spa and outdoor pool.

During the 1980s the pub appeared in an advert starring Ted Moult for replacement-window company Everest, and it appeared in the first Vodafone advert, broadcast during the 1990s. Everest returned in 2008 to film a new advert with Craig Doyle and installed new windows and solar panels. The inn was visited by James May and Oz Clarke in Oz and James Drink to Britain, first broadcast in 2009.

In May 2019, scenes for ITV show Vera were filmed, for an episode aired in January 2020. The pub has also featured in The Inspector Lindley Mysteries, Murder in Mind, Top Gear, The Fast Show, Wish You Were Here, All Creatures Great and Small, and Jude the Obscure.

All content from Kiddle encyclopedia articles (including the article images and facts) can be freely used under Attribution-ShareAlike license, unless stated otherwise. Cite this article:
Tan Hill, North Yorkshire Facts for Kids. Kiddle Encyclopedia.