Terrell Raymonn Suggs (born June 11, 1982 in Minneapolis, Minnesota) is an American football player. He plays as a linebacker and defensive end for the Baltimore Ravens of the National Football League (NFL). Suggs was drafted out of Arizona State University by the Ravens with the 10th pick in the first round of the 2003 NFL Draft. He won Super Bowl XLVII with the Ravens when they defeated the San Francisco 49ers 34-31.

Suggs played for Arizona State Univerity in college. In his final season, Suggs had 24 sacks, an Arizona state record.

Suggs was drafted in 2003 by the Baltimore Ravens of the NFL at 10th overall. Suggs was expected to go higher, but slipped because of a slow time in a 40-yard run. In 2003, Suggs got 21 tackles and 12.5 sacks. He also caught an interception which he returned 11 yards. For his efforts, he won the NFL Defensive Rookie of the Year Award. 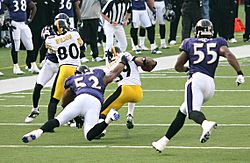 Suggs remained a good player for Baltimore. He also become known for his fun/joking style on and off the field. In 2008, Suggs caught two interceptions. He returned them both for touchdowns. The Ravens rewarded him with a 6 year, $66 million contract in 2009. In 2010, Suggs got 70 tackles (50 alone), a career-high 14.5 sacks, seven foced fumbles, and nine yards on two interceptions. He was the NFL Defensive Player of the Year in 2011.

Suggs has become known as one of the great all-time Baltimore Ravens defenders with Ray Lewis and Ed Reed. During his career so far, Suggs has 565 tackles (408 alone), a Ravens record 82.5 quarterback sacks, 41 deflected passes, 7 interceptions, 144 return yards, and two touchdowns.

He won Super Bowl XLVII with the Ravens when they defeated the San Francisco 49ers 34-31.

All content from Kiddle encyclopedia articles (including the article images and facts) can be freely used under Attribution-ShareAlike license, unless stated otherwise. Cite this article:
Terrell Suggs Facts for Kids. Kiddle Encyclopedia.