The Extra Mile facts for kids 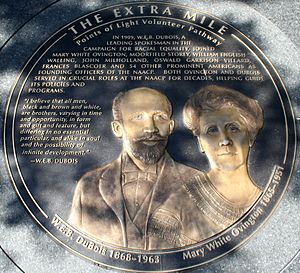 The Extra Mile – Points of Light Volunteer Pathway is a memorial in Washington D.C. Located adjacent to the White House, the monument is composed of 34 bronze medallions honoring people who "through their caring and personal sacrifice, reached out to others, building their dreams into movements that helped people across America and throughout the world".The medallions, each 42 inches in diameter, are embedded in sidewalks that form a one-mile walking path bounded by Pennsylvania Avenue, 15th Street, G Street, and 11th Street, NW. Each medallion includes a bas-relief likeness of one or more honorees, a description of their achievement and a quotation.

The Extra Mile was founded by John A. Johansen in 1992. Planning and development for the monument were managed by the Make a Difference Foundation until its merger with the Points of Light Foundation in 2002. The Extra Mile memorial was dedicated on October 14, 2005 in a ceremony attended by President George H. W. Bush and Barbara Bush.

All content from Kiddle encyclopedia articles (including the article images and facts) can be freely used under Attribution-ShareAlike license, unless stated otherwise. Cite this article:
The Extra Mile Facts for Kids. Kiddle Encyclopedia.