The Number Devil facts for kids

The Number Devil: A Mathematical Adventure (German: Der Zahlenteufel. Ein Kopfkissenbuch für alle, die Angst vor der Mathematik haben) is a book for children and young adults that explores mathematics. It was originally written in 1997 in German by Hans Magnus Enzensberger and illustrated by Rotraut Susanne Berner. The book follows a young boy named Robert, who is taught mathematics by a sly "number devil" called Teplotaxl over the course of twelve dreams.

The book was met with mostly positive reviews from critics, approving its description of math while praising its simplicity. Its colorful use of fictional mathematical terms and its creative descriptions of concepts have made it a suggested book for both children and adults troubled with math. The Number Devil was a bestseller in Europe, and has been translated into English by Michael Henry Heim.

Robert is a young boy who suffers from mathematical anxiety due to his boredom in school. His mother is Mrs. Wilson. He also experiences recurring dreams—including falling down an endless slide or being eaten by a giant fish—but is interrupted from this sleep habit one night by a small devil creature who introduces himself as the Number Devil. Although there are many Number Devils (from Number Heaven), Robert only knows him as the Number Devil before learning of his actual name, Teplotaxl, later in the story. 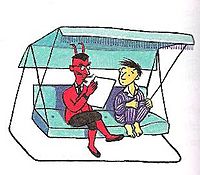 An illustration by Rotraut Susanne Berner depicts the Number Devil showing a mathematical proof to Robert.

All content from Kiddle encyclopedia articles (including the article images and facts) can be freely used under Attribution-ShareAlike license, unless stated otherwise. Cite this article:
The Number Devil Facts for Kids. Kiddle Encyclopedia.