The Oregon Trail is a computer game developed by the Minnesota Educational Computing Consortium (MECC) and first released in 1985 for the Apple II. It was designed to teach students about the realities of 19th-century pioneer life on the Oregon Trail. In the game, the player assumes the role of a wagon leader guiding a party of settlers from Independence, Missouri, to Oregon's Willamette Valley via a covered wagon in 1848.

The game was designed and created by a team at MECC, led by R. Philip Bouchard, who also served as the principal designer. It was loosely based on an earlier text-based game also named The Oregon Trail, originally developed by Don Rawitsch, Bill Heinemann, and Paul Dillenberger in 1971 and released on the MECC timeshare system in 1975, followed by similar versions for Apple, Atari, Commodore, and Radio Shack computers (from 1978 to 1984).

The 1985 version is the first graphical and the most well known entry in the Oregon Trail series, and it was released in multiple editions between 1985 and 1993 for several platforms, including Apple II, DOS, and Macintosh computers. Games in the series have since been released in many editions by various developers and publishers, many titled The Oregon Trail. The multiple games in the series are often considered to be iterations on the same title, and they have collectively sold over 65 million copies and have been inducted into the World Video Game Hall of Fame. The series has also inspired a number of spinoffs such as The Yukon Trail and The Amazon Trail. 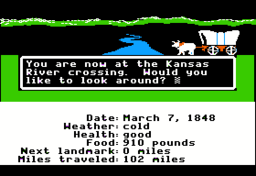 Screenshot from the Apple II version

The player can choose to be a banker from Boston, a carpenter from Ohio, or a farmer from Illinois. Each profile starts with a specified amount of money to spend at the supply store (the banker has the most, the farmer the least), before beginning their journey. After the player sets off from Independence, Missouri, there are several landmarks along the trail where players can make decisions, shop for supplies or rest. Players can purchase supplies such as oxen to pull the wagon, food to feed their party, clothing to keep their party warm, ammunition for hunting, and spare parts for the wagon. These landmarks include: Kansas River, Big Blue River, Fort Kearney, Chimney Rock, Fort Laramie, Independence Rock, South Pass, Fort Bridger, Green River, Soda Springs, Fort Hall, Snake River, Fort Boise, Grande Ronde Valley in the Blue Mountains, Fort Walla Walla, and The Dalles. When approaching Oregon's Willamette Valley, travelers can either float a raft through the Columbia River Gorge or take the Barlow Road.

An important aspect of the game was the ability to hunt. Using guns and bullets bought over the course of play, players select the hunt option (#8) and hunt wild animals to add to their food reserves. In the original version, players controlled the wagon leader who could aim a rifle in one of eight directions and fire single shots at animals. In later versions, players hunted with a cross-hair controlled by the mouse or touchscreen. While the player can shoot as many wild games as they have bullets, only 100 pounds of meat can be carried back to the wagon at once in early versions of the game. In later versions, as long as there were at least two living members of the wagon party, 200 pounds could be carried back. Also in later versions, players could hunt in different environments (hunting during winter showing snow-covered grass, for example), and the over-hunting of animals would result in "scarcity" that reduced the number of animals appearing later in the game. Some versions also allow the player to go fishing.

Throughout the course of the game, members of the player's party can fall ill and not rest, which causes further harm to the victim. The party can die from various causes and diseases, such as measles, snakebite, exhaustion, typhoid, cholera, and dysentery, as well as from drowning or accidental gunshot wounds. The player's oxen are also subject to injury and death.

At the conclusion of the journey, a player's score is determined in two stages. In the first stage, the program awards a "raw" or the unscaled number of points for each remaining family member (weighted by party health), each remaining possession (weighted by type), and remaining cash on hand (one point per dollar). In the second stage, the program multiplies this raw score depending on the party's initial level of resources determined by the profession of the party's leader; for example, in the Apple II game, a banker starting with $1600 receives no bonus, the score of a carpenter starting with $800 is doubled, and the score of a farmer starting with $400 is tripled. The player's score is added to a high-score list.

All content from Kiddle encyclopedia articles (including the article images and facts) can be freely used under Attribution-ShareAlike license, unless stated otherwise. Cite this article:
The Oregon Trail (1985 video game) Facts for Kids. Kiddle Encyclopedia.