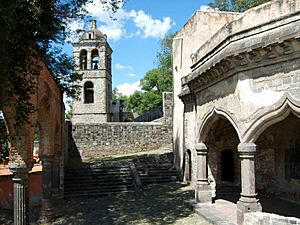 Old monastery and church of St. Francis of Assisi

Tlaxcala de Xicoténcatl is the capital of the Mexican state of Tlaxcala. About 84.000 people live in the city itself. Its urban area has about 250.000 people. The city has a historic center. The church of St. Francis was consecrated in 1521. It is the oldest church on American soil.

All content from Kiddle encyclopedia articles (including the article images and facts) can be freely used under Attribution-ShareAlike license, unless stated otherwise. Cite this article:
Tlaxcala de Xicoténcatl Facts for Kids. Kiddle Encyclopedia.