Kids Encyclopedia Facts
Not to be confused with Greater Upper Marlboro, Maryland.

Upper Marlboro, officially the Town of Upper Marlboro, is the seat of Prince George's County, Maryland, United States. The population within the town limits was 631 at the 2010 U.S. Census, although Greater Upper Marlboro is many times larger.

Upper Marlboro was established in 1706 as "Marlborough Town", after John Churchill, 1st Duke of Marlborough, an ancestor of Winston Churchill. In 1744, the town was renamed to "Upper Marlborough". In the late 19th century, the town's name changed from Upper Marlborough to Upper Marlboro. The name change is linked to a postal clerk who felt that the last three letters, "ugh", did not properly fit on the rubber stamps being used at the time. By 1893, postal guides were referring to the town as Upper Marlboro and the name stuck, despite a proposed ballot to have it changed back in 1968. 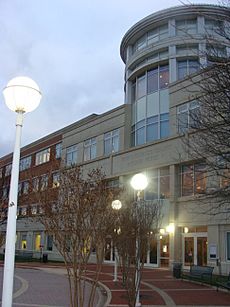 The main entrance to the Prince George's County courthouse in December 2008. 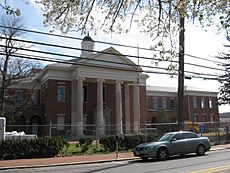 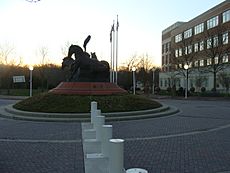 The Three Horse Statue featured prominently in front of the county courthouse in December 2008.

The area of Upper Marlboro was first settled around 1695. It was named after John Churchill, 1st Duke of Marlborough, an ancestor of Winston Churchill. The land, which was to become the town, was part of several estates known as Grove Landing, Meadows, and Darnall's Chance, owned by the Brooke, Beall, and Darnall families, respectively.

Darnall's Chance, also known as the Buck House, was built between 1694 and 1712. The house can still be found across from the present-day County Administration Building on Gov. Oden Bowie Drive. It was owned by the Darnall and Carroll families. The home may have been the birthplace of Daniel Carroll, a signer of the U.S. Constitution, and his brother, John Carroll, the first archbishop of Baltimore, as well as the first Roman Catholic prelate in what would become the United States.

In 1706, Marlborough Town was established as a port town by the Act for the Advancement of Trade and Erecting Ports and Towns. It was declared that the town would be constructed, "at the upper landing on the Western Branch, commonly called Colonel Belt's landing." County surveyor Thomas Truman Greenfield conducted a survey of 100 acres (0.40 km2) of the three estates from which the town would be formed. Streets, alleys, a meetinghouse, lots for small businesses, and 100 lots to be used for homes were laid out. Earliest plans showed the town being laid out in a grid pattern with an L shape.

Residents of the area were not happy with Greenfield's initial layout and petitioned the General Assembly to have the town replatted. In 1744, the new survey was approved and the town was given a new name, Upper Marlborough. Upper was added to distinguish the town from the community of Marlboro (now known as Lower Marlboro) in Calvert County.

Early in its life, when the western branch of the Patuxent River was still navigable, the town served as a port town for tobacco ships. The town blossomed into an agricultural, social, and political hot spot. Farms, many of which raised tobacco, dominated the surrounding areas.

In 1721, a courthouse was constructed in the town. The county seat was then moved from Charles Town, on the banks of the Patuxent, to Upper Marlborough. The courthouse was built with money from a 12-pound tobacco tax imposed on county inhabitants. One of the first laws passed at the courthouse was the Public School Act, which established a public school system.

During the late 18th and early 19th centuries, many prominent merchants, lawyers, and politicians lived and worked in the area. Horse racing came to the town around the mid-18th century and attracted many people from the surrounding areas. The Maryland Jockey Club sponsored spring and summer races at the race track south of town, and racing continued there until 1972, when they were moved to the Bowie Race Track. The race track is now part of the Equestrian Center owned by Prince George's County.

Since its initial conception the town has changed quite a bit. It initially boomed as a port town for tobacco trade, but the clearing and cultivation of land for farming would lead to erosion in the area. Over the years this erosion caused sedimentation, leading the Western Branch to become unnavigable. The fields of tobacco that once dominated the area have been converted over to residential developments, with the number of farms dwindling each year.

The courthouse has been a critical part of the town since it became the county seat in 1721. Since then, the courthouse in Upper Marlboro has seen many changes. Between 1798 and 1801, a new courthouse was constructed on the site of the old one. The courthouse was again rebuilt in the 1880s.

In 1939, the courthouse was substantially expanded and rebuilt. During this time, the building gained its famous stone Ionic columns. According to county historian Susan Pearl, "They wanted the neo-classic Georgian university campus building, and that's what they got." The total cost of the revision was $178,000.

In the early 1990s a new courthouse was erected behind the existing courthouse. The new courthouse, composed of the Marbury and Bourne wing, was completed in 1991. The new building occupies 360,000 square feet (33,000 m2) of space and cost $80 million. The old courthouse was then designated as the Duvall Wing and was attached to the new section by walkways.

In May 2003, the old courthouse was closed for a $25 million renovation. On November 3, 2004, two months before the building was scheduled to reopen, a fire broke out and destroyed much of the 151,000-square-foot (14,000 m2) building. The fire left only a charred skeleton of the cupola, which had overlooked Main Street for 64 years.

In January 2007, the courthouse briefly caught fire again when sparks from a construction worker's welding tool ignited building materials on the roof. Firefighters quickly contained the blaze, and the renovations continued.

On March 12, 2009, the Duvall Wing of the Prince George's County Courthouse reopened after being closed in 2001 for renovations.

Since the 1990s, the Prince George's County government has been purchasing land in Largo, Maryland due to its convenient location near the Washington Metro and interstate highways. In 2015, County Executive Rushern Baker recommended the move of the county's seat from Upper Marlboro to Largo so that residents could be better served.

Upper Marlboro is the county seat of Prince George's County, a large urban and suburban area of some 850,000 people adjacent to Washington, D.C. U.S. Route 301 and Maryland Route 4 intersect at the edge of town. The northern terminus of the Stephanie Roper Highway (Maryland Route 4) is in Upper Marlboro at the intersection of Pennsylvania Avenue and Water Street. Major features of the town include the courthouse, jail, county office building, board of education, and a lake with walking path. Just to the south of town is the Prince George's Equestrian Center which is the location of the annual county fair, a major annual antiques show and The Show Place Arena on the former Marlboro racetrack grounds. This arena is used for events such as hockey games, circuses, rodeos, conventions, trade shows, and graduation ceremonies of many regional high schools, as well as daily overflow parking for county governmental employees, jurors, and visitors.

Although the surrounding area has many rural, pastoral features, including horse farms, housing developments are increasingly prevalent. However, except for supermarkets, an Amish market, car dealers, and a Home Depot, all outside the town limits, the town and surrounding area have only minimal shopping; therefore, residents must travel to Bowie, Clinton, Brandywine, Waldorf, or Forestville to find department stores. Upper Marlboro is convenient to employees commuting to locations along Maryland Route 4 or US Route 301, such as Joint Base Andrews and the U.S. Census Bureau.

The Town of Upper Marlboro is often mistaken for the surrounding unincorporated area of Greater Upper Marlboro, with a population of nearly 20,000 in an area of 77 square miles (200 km2) (as designated by the post office).

The climate in this area is characterized by hot, humid summers and generally mild to cool winters. According to the Köppen Climate Classification system, Upper Marlboro has a humid subtropical climate, abbreviated "Cfa" on climate maps.

As of 2015[update] about 6,000 people work in the town, with employees of the Prince George's County government making up the majority.

There were 290 households, of which 29.0% had children under the age of 18 living with them, 34.1% were married couples living together, 17.6% had a female householder with no husband present, 2.4% had a male householder with no wife present, and 45.9% were non-families. 36.9% of all households were made up of individuals, and 11% had someone living alone who was 65 years of age or older. The average household size was 2.18 and the average family size was 2.88. 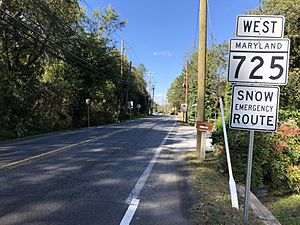 All content from Kiddle encyclopedia articles (including the article images and facts) can be freely used under Attribution-ShareAlike license, unless stated otherwise. Cite this article:
Upper Marlboro, Maryland Facts for Kids. Kiddle Encyclopedia.