Bowie /ˈbuːi/ is a city in Prince George's County, Maryland. The population was 54,727 at the 2010 U.S. Census. Bowie has grown from a small railroad stop to the largest municipality in Prince George's County, and the fifth most populous city and third largest city by area in the U.S. state of Maryland. In 2014 CNN Money ranked Bowie 28th in its Best Places to Live in America list.

The city of Bowie owes its existence to the railway. In 1853 Colonel William Duckett Bowie obtained a charter from the Maryland legislature to construct a rail line into Southern Maryland. In 1869 the Baltimore & Potomac Railroad Company began the construction of a railroad from Baltimore to Southern Maryland, terminating in Pope's Creek. The area had already been dotted with small farms and large tobacco plantations in an economy based on agriculture and slavery. In 1870, Ben Plumb, a land speculator and developer, sold building lots around the railroad junction and named the settlement Huntington City. By 1872 the line was completed, together with a "spur" to Washington, D.C. and the entire line through Southern Maryland was completed in 1873.

Huntington City was renamed in honor of the son of William Duckett Bowie and his business partner, Oden Bowie, who was President of the Baltimore & Potomac Railroad at the time, and previously Governor of Maryland. The town was subsequently rechartered as Bowie in 1880. In the early days the land was subdivided by developers into more than 500 residential building lots, to create a large town site at a junction of the Baltimore and Potomac's main line to southern Maryland, and the branch line to Washington, D.C.

By 1902 the Baltimore & Potomac was purchased by the powerful Pennsylvania Railroad. A second railroad entered the community when the Washington, Baltimore and Annapolis Electric Railway electric trolley line commenced service in 1908. The large interurban cars brought rapid transit to the area, with trains running hourly. Bowie area stations included High Bridge, Hillmeade, and the Race Track.

The convergence of the two rail systems induced the Southern Maryland Agricultural Society to build the Bowie Race Track in 1914. The track enabled the Belair Stud to become one of Maryland's premier areas for thoroughbreds. Also in 1914, a teacher-training college, or normal school as it was referred to then, was built for African-Americans, just outside the town. This now has become Bowie State University. The town of Bowie was incorporated in 1916.

In 1957 the firm of Levitt and Sons acquired the nearby Belair Estate, the original colonial plantation of the Provincial Governor of Maryland, Samuel Ogle, and developed the residential community of Belair at Bowie. Two years later the town of Bowie annexed the Levitt properties, and then re-incorporated the now-larger area as a city in 1963. The overwhelming majority of Bowie residents today live in this 1960s Levitt planned community, whose street names are arranged in alphabetical sections. Levitt & Sons had a long history of prohibiting the sale of houses (including resale by owners) to African Americans which led to civil rights protests in Bowie in 1963.

The original Belair Estate contains the Belair Mansion (circa 1745), the five-part Georgian plantation house of Governor Samuel Ogle and his son Governor Benjamin Ogle. It was purchased in 1898 by the wealthy banker James T. Woodward who, on his passing in 1910, left it to his nephew, William Woodward, Sr., who became a famous horseman. Restored to reflect its 250-year-old legacy, the Mansion is listed on the National Register of Historic Places.

Belair Stable, on the Estate, was part of the famous Belair Stud, one of the premier racing stables in the 1930s, '40s, and '50s. Owned and operated by William Woodward, Sr. (1876–1953), it closed in 1957 following the death of his son, Billy Woodward. Belair had been the oldest continually operating thoroughbred horse farm in the country.

Bowie has an area of 16 square miles (41 km2) and about 50,000 residents with nearly 2,000 acres (8.1 km2) set aside as parks or open space. It has 72 ball fields, three community centers, an ice arena at Allen Pond Park, the Bowie Town Center, the 800-seat Bowie Center for the Performing Arts, a 150-seat theatrical playhouse, a golf course, and three museums.

Bowie's rail town history is on display via the Huntington Railroad Museum, within the local rail station's restored railroad buildings. In 2006, the city reopened the Bowie Building Association building, a small brick and block structure constructed circa 1930, as a Welcome Center; it originally housed the Bowie Building Association, which helped finance much of the community's early development.

Bowie is home to the Bowie Baysox, a Class AA Eastern League professional baseball team affiliated with the Baltimore Orioles. As of 2015, the Baysox play their home games at Prince George's Stadium.

The city has recently added a senior citizens center and a gymnasium for community programs. 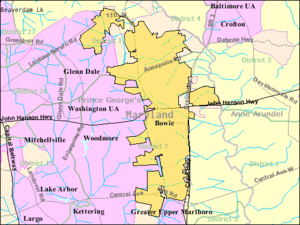 Detailed census map of Bowie, MD and surrounding areas. The city is in orange.

The climate in this area is characterized by hot, humid summers and generally mild to cool winters. According to the Köppen Climate Classification system, Bowie has a humid subtropical climate, abbreviated "Cfa" on climate maps.

There were 19,950 households of which 37.0% had children under the age of 18 living with them, 53.2% were married couples living together, 14.0% had a female householder with no husband present, 4.3% had a male householder with no wife present, and 28.5% were non-families. 23.4% of all households were made up of individuals and 7.7% had someone living alone who was 65 years of age or older. The average household size was 2.73 and the average family size was 3.23.

The following is a list of historic sites in the city of Bowie and vicinity identified by the Maryland-National Capital Park and Planning Commission:

In June 2016, Mayor Robinson gave honorary Bowie citizenship to Mayor Luigi Lucchi of Berceto, Italy as part of an International Youth Festival being held there.

All content from Kiddle encyclopedia articles (including the article images and facts) can be freely used under Attribution-ShareAlike license, unless stated otherwise. Cite this article:
Bowie, Maryland Facts for Kids. Kiddle Encyclopedia.