Crofton is a census-designated place and planned community in Anne Arundel County, Maryland, United States, located 9.8 miles (15.8 km) west of the state capital Annapolis, 24 miles (39 km) south of Baltimore, and 24 miles (39 km) east-northeast of Washington, D.C. The community was established in 1964 and as of the 2020 census, it had a population of 29,136. 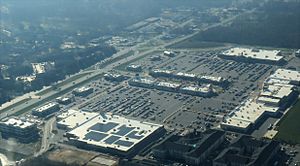 In 1963, after the Crawford Corporation accumulated over 1,600 acres (650 ha) of land, it announced that it would build a new community called Crofton. This new town and planned community was founded at the same time as Reston, Virginia (April 17, 1964) and Columbia, Maryland (1967). Crofton would be anchored by a community golf course, which later became the Crofton Country Club. Crofton was officially founded in the fall of 1964. The company considered picking an English name for the new town that "sounds well and implies that this is a pleasant place to live." It ended up picking the name "Crofton", named after a small township in Cumberland County, England. The English town was originally called Croft-town, derived from the word "Croft", as the town standing upon the Crofts. Originally an exclusive gated community, Crofton's gates were opened and they now only serve as a symbol for the community.

In July 2007 Crofton was named by Money magazine as one of "100 Best Places to Live" in the United States. Crofton placed 72nd out of 100 cities on the list. It was selected for its relative anonymity while still boasting many major amenities, excellent schools, and sought-after location.

Crofton was selected again for the magazine's 2011 list, this time placing 82nd.

Crofton was in the national news in late June and early July 2002 after a Northern Snakehead fish was discovered in a local pond. The infestation was found in water behind the Crofton post office and the adjacent shopping center, across Route 3 from local landmark Lake Louise.

The snakehead species is highly aggressive and voracious. In order to ensure that the fish were eliminated, in September 2002 the main pond and two nearby ponds were dosed heavily with rotenone and subsequently with potassium permanganate. Six adult snakeheads and more than one thousand juvenile fish were found and destroyed.

Ultimately, the incident initiated a national discussion on invasive species. One comparison case was the mute swan, also an invasive and destructive species of the Chesapeake Bay watershed but, in comparison, quite beautiful, and which garnered support from some environmental and animal rights groups.

Several movies were inspired by this incident. Syfy aired two movies in relation to the snakehead outbreak: in March 2004, a movie called Snakehead Terror was featured, and the movie Frankenfish was aired in June 2004. Ten Pound Films also produced a feature film titled Swarm of the Snakehead which related to this incident. In 2007, a documentary titled Fishzilla: Snakehead Invasion aired on the National Geographic Channel, discussing the ecological damage that the snakeheads found in Crofton have done to surrounding areas.

The original community of Crofton was built within a triangle formed by three major roads: Crain Highway (Maryland Route 3) to the northwest, Davidsonville Road (Maryland Route 424) to the northeast, and Defense Highway (Maryland Route 450) to the south. Within the triangle, Crofton Parkway, a loop road 3.5 miles (5.6 km) long, encircles the center of the community. Crofton Parkway is the scene of yearly parades, two of the community's five elementary schools, the Town Hall, Village Green, community events, Crofton Country Club, and walkers, joggers and bikers around the loop. Crofton also has a community pool, the Crofton Swim and Tennis Club (CSTC), which is restricted to those inhabitants of the triangle.

The Crofton CDP now extends north and east from the triangle, including Crofton Park and reaching northeast as far as St. Stephens Church Road.

The Little Patuxent River borders Crofton on its southwest corner at the intersection of Route 3 and Route 450, providing a buffer between Anne Arundel and Prince Georges counties.

According to the United States Census Bureau, the Crofton CDP has a total area of 6.6 square miles (17.1 km2), all of it land.

The U.S. Census Bureau has recorded the following populations for the Crofton census-designated place.

For grades 6–8, students from all four of these elementary schools attend Crofton Middle School in adjacent Gambrills, Maryland.

Older students from Crofton attend one of three high schools:

However, in response to overcrowding caused by continuing development in Crofton and BRAC realignments, a redistricting proposal was approved for Crofton schools in 2013 and construction began in late 2018 on Crofton High School. A redistricting committee was formed in late 2018. In April 2019, the school board adopted a redistricting plan under which all students from the four local elementary schools will attend the new high school. Kathryn Feuerherd was appointed principal in May 2019. Crofton High School has been opened as of September 2020 for two grades.

There are also some private preschools in Crofton:

All content from Kiddle encyclopedia articles (including the article images and facts) can be freely used under Attribution-ShareAlike license, unless stated otherwise. Cite this article:
Crofton, Maryland Facts for Kids. Kiddle Encyclopedia.