The town has a post office and the ZIP code is 92086. It is near the Palomar Observatory and Warner Springs Ranch.

Warner Springs is also a popular area for gliding, due to the topography of the Peninsular Ranges in the area.

The hot springs were "rediscovered" by Spanish explorers of upper Las Californias province in 1795. 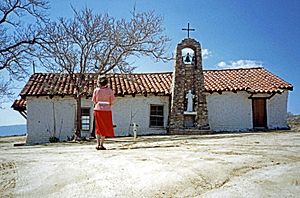 The Santa Ysabel Asistencia (satellite mission) was founded c. 8 miles (13 km) to the south of the Agua Caliente springs in 1818 by Spanish missionaries originating from Mission San Diego de Alcalá.

St Francis Mission chapel was erected near the settlement c. 1830. Its walls use adobe mud bricks, white-washed over and a roof incorporating locally made red tiles. A stone bell tower is placed next to the southern wall of the church.

The Warner's Ranch adobe complex of Juan Jose Warner was a way station for large numbers of emigrants on the Southern Emigrant Trail from 1849 to 1861, as it was a stop on the Southern Emigrant–Gila River Trail. He opened the only trading post that served travelers on the trail between New Mexico Territory and the Pueblo de Los Angeles in Alta California. It later became a stop on the San Antonio-San Diego Mail Line in 1857, and the Oak Grove Butterfield Stage Station stop on the Butterfield Overland Mail stagecoach line (1857–1861).

At the start of the Civil War in 1861, stagecoach service was discontinued and the Union Army established Camp Wright, a cavalry outpost at the ranch to protect the route from Southern California to Fort Yuma, and to intercept secessionist sympathizers attempting to the join the Confederate armies in the American South and in the Arizona Territory.

Former California Governor John Downey purchased the Warner Springs Ranch in 1880, to graze cattle and sheep herds. In 1892, after years of disputes with the Cupeños living at the ranch, Downey sued to evict the Indians. In 1894 after Downey's death, the U.S. Supreme Court ruled against the Cupeños. The eviction order came in 1901 and their exodus two years later became known as the “Cupeno Trail of Tears.”

William Henshaw purchased the Warner Springs Ranch in 1911, and had Henshaw Dam completed by latter 1922 and its reservoir filled by 1924. In 1978 the reservoir level was lowered 40% due to danger from the Elsinore Fault Zone running beneath the dam.

All content from Kiddle encyclopedia articles (including the article images and facts) can be freely used under Attribution-ShareAlike license, unless stated otherwise. Cite this article:
Warner Springs, California Facts for Kids. Kiddle Encyclopedia.