Watton is a market town in the district of Breckland within the English county of Norfolk. The A1075 Dereham-Thetford road and the B1108 Brandon-Norwich Road meet at a crossroads here, where the town developed, about 25 miles (40 km) west of Norwich.

In 1984 Watton was twinned with the Lower Rhine (Niederrhein) town of Weeze, Germany, with the subsequent twinning charter being formally signed in 1987. 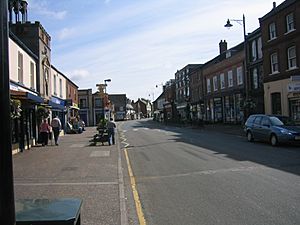 A market is held every Wednesday, between 9.00am and 1.00pm, although stalls are often kept open on the high street well after this time. Like many Norfolk markets, Watton market always has a wide variety of fresh sea produce available, usually caught the previous day. It often has available such regional delicacies as samphire and fresh water crayfish. The Lord of Watton Hall, John de Vaux, obtained a charter for a market to be held on Fridays. But, the people of nearby Saham Toney complained to the King that the market was harming their own held on the same day. Their complaints were upheld and the charter was withdrawn.

John de Vaux conveyed the manor to his brother Oliver, who was evidently on better terms with the King since he immediately obtained a new charter for a Wednesday market. The market centred on Market Square in front of Wayland Hall, and as it grew it spread westwards along High Street. A market cross stood in the square supported by eight oak pillars. This cross was demolished in 1820 and replaced by a milestone showing the distances to neighbouring towns.

The nearby Wayland Wood is the setting of the old English ballad "Babes in the Wood". First published in 1595, it tells the tale of two Norfolk children abandoned and left to die in the woods by their uncle. The legend is also depicted on the town sign, which occupies a prominent position in High Street in front of the clock tower.

Wayland wood is a popular dog walking and relaxation spot (although dogs are banned, this rule is unenforced). The wood is now a nature reserve owned by the Norfolk Wildlife Trust. 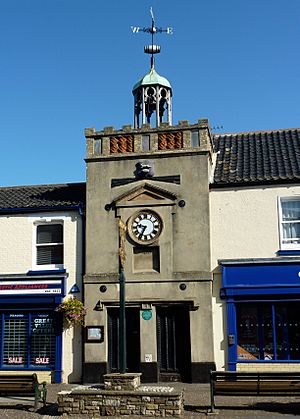 The clock tower of Watton was built in 1679 by Christopher Hey, a wealthy mercer. The tower was built to hold a fire warning bell following the 'Great Fire of Watton' that destroyed more than sixty properties in 1674. This early warning bell, known as 'Ting-Tang,' is hung in an ornate cupola on top of the tower. The brick tower was rendered with cement and a new clock, donated by a local citizen, was installed in 1827. To commemorate the silver jubilee of King George V and Queen Mary in 1935, a new clock face was installed.
The clock is still working in the 21st century. The building is now home to a tourist and local information centre. 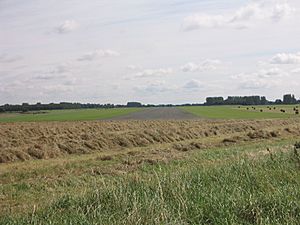 Watton hosted a large RAF station for many years, namely RAF Watton, which stimulated the town's economy. After the Second World War and later changes, the RAF station was used as a Transport Command airfield and as a radar station, as well as providing housing for many RAF personnel and their families. Most of the station has been developed as part of the Blenheim Grange housing estate. The runway is being returned to agricultural land. Part of the old military land was developed as Wayland Prison.

Before housing construction, the base was used by the USAF from the nearby RAF Mildenhall for training, using C130s for refuelling exercises and parachute training. It was also part of the Stanford Training Area (STANTA) and used for army training purposes.

The annual Wayland Show is one of Norfolk's oldest agricultural events, having been held for more than 140 years. Held on the first Sunday in August, the show attracts crowds of more than 5,000 people to see displays of livestock; cattle, pigs, sheep and fur & feather and the many marquees and trade stands. The event also features displays of classic cars, vintage tractors, gun dogs, falconry and horse and carriage rides, and many equestrian events. It is held at the western side of Watton, with the show ground being accessed off Brandon Road.

As part of the Sustrans Connect2 project proposals are in place to create a cycling and walking route between Watton and the village of Griston. The new route would follow the eastern boundary of Watton airfield and provide a shorter, traffic free alternative to the A1075. Norfolk County Council have allocated a £40,000 contribution towards funding of the scheme. A schematic map of the scheme has been published online.

All content from Kiddle encyclopedia articles (including the article images and facts) can be freely used under Attribution-ShareAlike license, unless stated otherwise. Cite this article:
Watton, Norfolk Facts for Kids. Kiddle Encyclopedia.