Brandon is a town and civil parish in the English county of Suffolk. Brandon is located in the Breckland area of Suffolk, close to the adjoining county of Norfolk. Surrounded by Forestry Commission and agricultural land, it is considered a rural town.

According to Eilert Ekwall (The Concise Oxford Dictionary of English Place Names) the likely origin of the name is "Brandon, usually 'hill where broom grows'", the earliest known spelling being in the 11th century when the town, gradually expanding up and along the rising ground of the river valley, was called Bromdun.

From prehistoric times the area was mined for flint as can be seen at Grimes Graves, a popular Brandon tourist destination. Much more recently, the town was a major centre for the production of gunflints.

The Domesday Book records that the manor of Brandon in 1086 had 25 households. In medieval times and beyond Brandon was renowned for its rabbit fur.

On 14 May 1789, the town suffered a Great Fire, a report of which can be found at the Brandon Heritage Centre. While all the young men were away at a fair day in nearby Thetford, a fire caused by a lightning strike set fire to the surgeon's house which quickly spread to the surrounding properties. Eleven houses were damaged and 8 of them were completely destroyed. The hardest hit was Francis Diggon, the saddler, who lost all of his property and possessions, costing a total of 381 pounds, 2 shillings.

Brandon's first cinema was brought to the town by Stanley Lingwood toward the end of 1917. Stanley had just been pensioned out of the Army due receiving a very severe hand wound at The Somme and his father, a wealthy furrier in the town named Palmer Lingwood, died that same time. He purchased the cinema from Shropshire and erected it between the family home, Avenue House, and the Church Institute, along Victoria Avenue. It was a wooden building and he named the cinema 'Electric Palace', and it stayed in his possession until December 1933 when he sold it to a King's Lynn businessman named Ben Culey, who had a cinema in neighbouring Thetford. Six months after Ben purchased the cinema it burnt to the ground in a mysterious fire and in February 1935 he opened another cinema on the site of the burned down one, which he named 'AVENUE'.

This new cinema was state of the art with the very latest projector, sound and acoustics, and the building proved very popular during the Second World War. The building still stands on the site today, having been a bingo hall recently, although it is currently empty and becoming derelict. 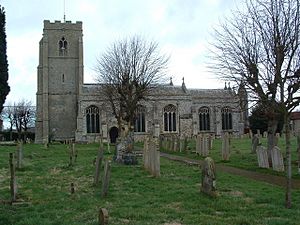 The town's current population is recorded as 9,636 people in the 2011 UK Census. Brandon has three schools; two primary, Forest Academy and Glade Primary School; and one High School, IES Breckland.

Brandon's population has steadily increased since the Second World War due to immigration. After the war there was an influx of servicemen from Poland who settled in the town and also in nearby Weeting, Norfolk. The Cold War saw many American service people and their families billeted in and around the town. The Greater London Council oversaw the building of a large Council estate off Thetford Road and Bury Road in the 1970s and many London families were relocated to Brandon during that time. 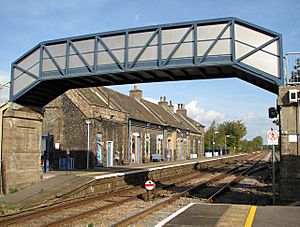 Brandon is situated on the A1065 Mildenhall to Fakenham road. It often suffers severe congestion due to large amounts of commuter traffic, holiday traffic travelling to the Norfolk Coast and HGVs. Several bus routes pass through the town as well.

Brandon railway station has an hourly service to Cambridge and Ely to the West and to Thetford and Norwich in the East.

Regular bus services operate from Brandon to the neighbouring towns of Bury St. Edmunds, Mildenhall and Thetford. There are also infrequent services (at school and shopping times) to Downham Market, King's Lynn and Norwich.

Flowing in an easterly direction the Little Ouse river is navigable through the town.

Brandon has a lawn bowls club, Brandon Town Bowling Club, which plays outdoors in the summer.

All content from Kiddle encyclopedia articles (including the article images and facts) can be freely used under Attribution-ShareAlike license, unless stated otherwise. Cite this article:
Brandon, Suffolk Facts for Kids. Kiddle Encyclopedia.