Wibaux ( WEE-boh) is a town in and the county seat of Wibaux County, Montana, United States. The population was 589 at the 2010 census.

There were 278 households of which 23.4% had children under the age of 18 living with them, 41.4% were married couples living together, 7.2% had a female householder with no husband present, 6.5% had a male householder with no wife present, and 45.0% were non-families. 42.4% of all households were made up of individuals and 17.3% had someone living alone who was 65 years of age or older. The average household size was 2.03 and the average family size was 2.76.

There were 239 households out of which 25.1% had children under the age of 18 living with them, 46.9% were married couples living together, 8.8% had a female householder with no husband present, and 41.8% were non-families. 39.3% of all households were made up of individuals and 21.3% had someone living alone who was 65 years of age or older. The average household size was 2.22 and the average family size was 3.00. 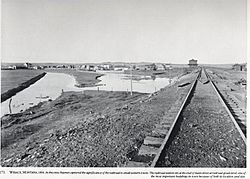 Northern Pacific Railway tracks in the Wibaux area in 1894, by Frank Jay Haynes.

The town originally had names such as Keith, Beaver, and Mingusville (named for Minnie and Gus Grisy, who ran the Post Office in the late 19th century). In 1895, the town was renamed for prominent local cattle rancher, Pierre Wibaux, who had immigrated to the area from France in 1883. Wibaux expanded his herds by buying stock from less fortunate ranchers.

After Wibaux's arrival, the town became a major cattle shipping center for the Northern Pacific Railroad, notably receiving some of the cattle from Theodore Roosevelt's Maltese Cross and Elkhorn ranches near Medora, North Dakota. The great cattle drives of the 1880s often passed by Wibaux on their way from Texas to the northern ranges.

Theodore Roosevelt had a famous encounter with a bully at Nolan's Hotel in Wibaux (Mingusville, at the time) shortly after moving to the North Dakota Badlands in 1884. Arriving at the hotel late at night, Roosevelt was accosted by a drunk sheep herder carrying cocked revolvers in both hands, and ordered to buy drinks for the crowd. Roosevelt pretended to move towards the bar, then punched the man three times in quick succession, causing the drunk to fire his revolvers as he fell. The future president then took away the man's guns before several other occupants of the hotel dragged him out into a shed.

Lore has it that in the late 1970s oil boom, Wibaux had a brawl unlike any seen before, straight out of an Old West show. Hundreds of drunk participants fought for hours in the streets. It started from some minor dispute.

Arleigh "Bunny" Meek, Jr. was the sheriff in Wibaux, and Wibaux County from 1968-1998 (32 years). He served longer than any other sheriff in Montana's history. He succeeded his father, Arleigh Meek, Sr. as sheriff. The only uniform he wore was his badge. Neither "Bunny" or his father carried a gun when they were sheriff, although they walked in and apprehended some very large, very violent (or drunk) individuals in this modern day old west town. 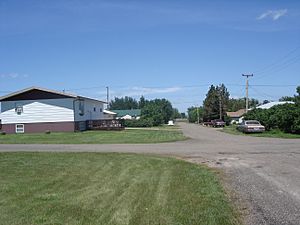 Looking east down B street in northern Wibaux

Wibaux operates a state travel center at the town's exit from Interstate 94, the Pierre Wibaux House Museum, and the Centennial Car Museum, which was sent to the New York World's Fair in 1964. At the western end of town, there is a statue of Pierre Wibaux that he commissioned in his will to look over the sloping landscape. Each year the town holds a summer festival, called the Ski Fest as homage to its predominantly Polish roots. The 2002 Vin Diesel movie, Knockaround Guys, was based (although not filmed) in Wibaux.

Beaver Creek runs through the town and has been known to contain large Walleye and Northern Pike.

All content from Kiddle encyclopedia articles (including the article images and facts) can be freely used under Attribution-ShareAlike license, unless stated otherwise. Cite this article:
Wibaux, Montana Facts for Kids. Kiddle Encyclopedia.