Wickham has a wide and well-proportioned square lined with historic buildings and is designated a conservation area.

It was the fording place of the River Meon on the Roman road between Noviomagus Regnorum (Chichester) and Venta Belgarum (Winchester), and the inferred divergent point of the route to Clausentum (Bitterne). The Roman road from Wickham to Chichester is still followed today by local roads, passing behind Portsdown Hill to the north of Portsmouth Harbour and then onwards via Havant. In contrast, the route to Winchester is mostly likely lost through neglect in the Dark Ages, before present field patterns emerged.

There have been a reasonable number of sites identified nearby associated with Romano-British industry. These have mainly been pottery kilns focused around the limit of navigation of the River Hamble, near Botley. It is also here that a ford on the Clausentum road has been identified.

Wickham has occasionally been hypothesised as an alternative to Nursling (on the River Test) or Neatham (near Alton) for the Roman station Onna listed in the Antonine Itinerary. However, no definite location for Onna has been determined.

It was the birthplace of William of Wykeham, founder of Winchester College and New College, Oxford.

The Admiralty Shutter Telegraph Line had a station at Wickham.

The village was an intermediate station on the Meon Valley Railway, a late Victorian route, until the line closed in 1955. At one time this railway was conceived as a direct route from London to the Isle of Wight. The closed line is now established as a cycle path and bridleway along the valley of the River Meon.

A traditional gypsy horse fair is held annually every 20 May, or another day if a Sunday, in the village square.

The Romans established a settlement at Wickham, on the road from the Roman centres of Chichester and Winchester. Iron works have been found northeast of the village, and various Roman finds to the southwest.

It was in Saxon Britain that the first written mention of the village appears, in a Royal Charter document dated 826. Recent excavation (1965–70) at the Manor House showed its grounds had dwellings and huts, evidence of Saxon settlement.

After the Norman Conquest, King William granted the Manor of Wickham to Hugo de Port and the Village appeared in the Doomsday Book of 1086, as part of the Titchfield Hundred. The present church of St Nicholas dates from 1126 and was run by the Canons of Titchfield. In 1269, King Henry III granted a charter to Roger de Scures, the Lord of The Manor at the time, for markets to be held on a Thursday. It is from this time that the layout of the village as we now know it began to emerge. Wickham also had a fair which attracted buyers and sellers from a wide area. Wickham fair (often referred to Wickham Horse Fair) is still held each year on 20 May. 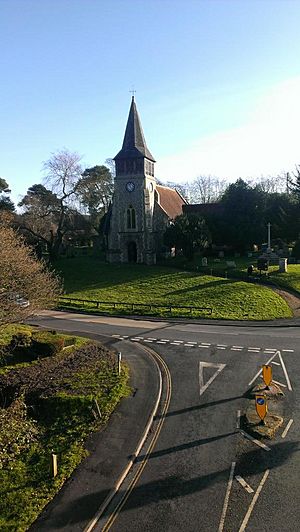 The Church of St Nicholas in Wickham was built in the early 12th century (although there has probably been a church on the site since the 7th century when the people of Hampshire were first converted to Christianity), however the church was largely rebuilt in the 19th century.

In the 18th century, there was a tanning industry in Wickham and in the 18th and 19th centuries a brewing industry. Both needed a supply of fresh water, which was readily available from the River Meon. In 1801, Wickham had a population of 901 and compared to most of the villages in Hampshire it was a large community. In 1820, Chesapeake Mill was built with timber taken from an American ship USS Chesapeake, which was captured in the War of 1812. Sir Richard Grindall who commanded HMS Prince at the battle of Trafalgar is buried in Wickham churchyard.

In 1903, a branch railway was built from Fareham through Wickham, to Droxford and Alton. It was closed to passengers in 1955 and the line converted to a footpath. The original station platforms can still be found.

In 1978, Wickham was twinned with the French village of Villiers-Sur-Mer. Wickham Vineyard opened in 1984.

In 1990, an old brewery and village hall in Wickham were converted into flats called Riverside Mews. The brewery shut in 1910 and the buildings were given to Wickham Parish Council to use as a village hall. 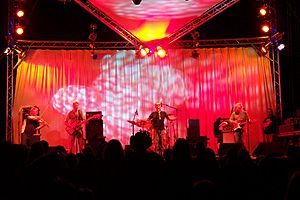 The Oysterband headlining the first Wickham Festival in 2006

After briefly moving to Stokes Bay in 2008 and 2009, the festival returned to Wickham in 2010, where it has remained ever since. Wickham Festival has expanded over the years, and has featured performances from such artists as James Blunt, 10cc, Wilko Johnson, The Proclaimers, KT Tunstall, Hugh Cornwell and Lightning Seeds.

Taste of Wickham is a food festival, first held in Wickham's medieval square in 2014. The festival offers local produce, barbecues, tasters and cookery demonstrations, and has attracted crowds of over 4,000 people to the village. Taste of Wickham returned in 2015, with increased numbers of stalls, crafts and musical displays.

Wickham has a tennis club, with two floodlit courts on Wickham Recreation Ground.

All content from Kiddle encyclopedia articles (including the article images and facts) can be freely used under Attribution-ShareAlike license, unless stated otherwise. Cite this article:
Wickham Facts for Kids. Kiddle Encyclopedia.