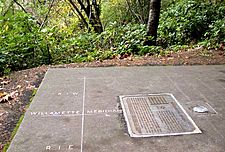 The Willamette Stone's location is now commemorated by a circular marker and plaque.

Close up of the current marker 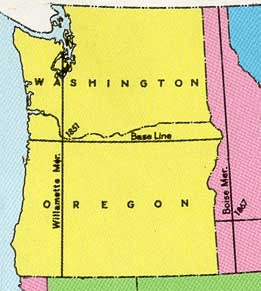 The Willamette Stone is located where the meridian and baseline intersect on this BLM map.

The Willamette Stone was a small stone obelisk originally installed by the Department of Interior in 1885 in the western hills of Portland, Oregon in the United States to mark the intersection and origin of the Willamette meridian and Willamette baseline. It replaced a cedar stake placed by the Surveyor General of the Oregon Territory in 1851; this stake defined the grid system of sections and townships from which all real property in the states of Oregon and Washington has been measured following the Donation Land Claim Act of 1850. The Willamette meridian runs north–south, and the Willamette baseline runs east–west through the marker. The easternmost northeast corner of Washington County is sited on the marker.

The location of the obelisk is now indicated by a stainless steel marker in Willamette Stone State Heritage Site, an Oregon state park approximately four miles (6.4 km) west of downtown Portland. The site is near Skyline Boulevard, in the West Hills overlooking the Tualatin Valley and the Willamette River watershed.

The grid defined by the stone extended the Public Land Survey System and was used as the basis of land claims in the Oregon Territory. The first marker, a red cedar stake, was placed on the site on June 4, 1851, by John B. Preston, the first Surveyor General of the Oregon Territory. Preston was appointed by President Millard Fillmore to create a system for surveying land in the territory; he lost his position in 1853, and "drifted into obscurity." The location was chosen such that the baseline would not cross the Columbia River and the meridian would lie west of Vancouver Lake. The meridian and baseline were surveyed using solar compasses by James E. Freeman of Wisconsin and William Ives of Michigan. Ives surveyed the baseline in both directions and the meridian to the north; Freeman surveyed the meridian to the south. The grid system was an extension of the system used in the Northwest Territory proposed by Thomas Jefferson. The Willamette Stone marked the location of the first townships and ranges north and south of the marker.

The location of the Willamette meridian and Willamette baseline can be identified by various streets that follow or parallel their courses, often named to call attention to this fact.

North–South streets and the meridian

Streets named because they parallel the meridian

East–West streets and the baseline

Streets named because they parallel the baseline

All content from Kiddle encyclopedia articles (including the article images and facts) can be freely used under Attribution-ShareAlike license, unless stated otherwise. Cite this article:
Willamette Stone Facts for Kids. Kiddle Encyclopedia.