Windorah is one of three towns in the Barcoo and a locality in Central West Queensland, Australia. It is named after the local Aboriginal word for "Big Fish". At the 2006 census, Windorah had a population of 158.

Located 35 kilometres (22 mi) downstream from where the Thomson and Barcoo Rivers join to form the multi-channelled Cooper Creek, Windorah is known as "The Heart of the Channel Country" and offers a welcome and interesting stop off for travellers to Birdsville, Bedourie, Longreach and points West. While the Shire covers an area of 60,901 km², the town has a population of 60 people, with a further 40 living at surrounding stations.

Sheep and cattle grazing are the mainstay of the district; however, recently oil and gas industries have developed in the area. Many locals also work on the Shire Council and the Dingo Barrier Fence.

The town was founded on a stock route and proclaimed in 1880. Cobb & Co once ran a stage coach service between Windorah and Adavale.

The town was completely isolated by floodwater in 1949 after surrounding areas were inundated by heavy rainfall. Low cloud and more rain prevented relief food supplies from being delivered by air from a RAAF Dakota. 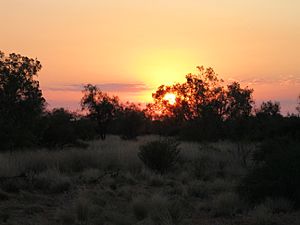 All content from Kiddle encyclopedia articles (including the article images and facts) can be freely used under Attribution-ShareAlike license, unless stated otherwise. Cite this article:
Windorah Facts for Kids. Kiddle Encyclopedia.