Windtower is a 2,695-metre (8,842-foot) tower-like summit located in the Wind Valley of Kananaskis Country in the Canadian Rockies of Alberta, Canada. Its nearest higher peak is Mount Lougheed, 3.0 km (1.9 mi) to the southeast. Windtower is a conspicuous landmark that can be seen from Highway 1, the Trans-Canada Highway in the Canmore area. Although not of remarkable elevation, the mountain has an imposing, overhanging north face with an appearance similar to peaks in The Bugaboos.

The Iron Butterfly is a formidable 450 metre 5.11 A4 rock climbing route on the northwest face. It was first climbed in 1988 by Jeff Marshall and Steve DeMaio, but attempts by others to repeat the feat have been unsuccessful.

The West Slope is a hike and easy scree scramble from Highway 742, the Smith-Dorrien/Spray Trail.

Windtower was named in 1950. The mountain's name was officially adopted in 1982 by the Geographical Names Board of Canada.

Based on the Köppen climate classification, Windtower is located in a subarctic climate zone with cold, snowy winters, and mild summers. Temperatures can drop below −20 °C with wind chill factors below −30 °C. Precipitation runoff from Windtower drains into the Bow River which is a tributary of the Saskatchewan River. 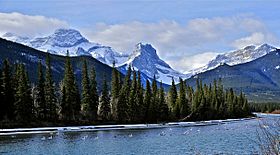 All content from Kiddle encyclopedia articles (including the article images and facts) can be freely used under Attribution-ShareAlike license, unless stated otherwise. Cite this article:
Windtower (Alberta) Facts for Kids. Kiddle Encyclopedia.