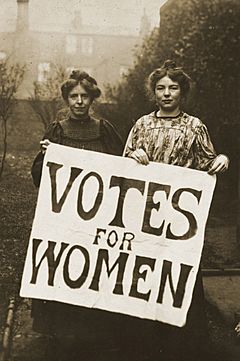 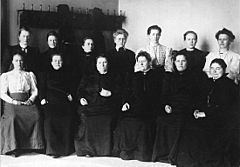 Thirteen of the total of nineteen female members of parliament. These were the first female MPs in the world, elected in Finland's parliamentary elections in 1907. 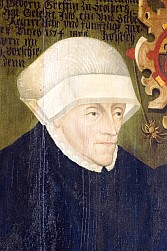 Anna II, Abbess of Quedlinburg. In the pre-modern era, abbesses could vote in some European national assemblies, because of their rank in the Catholic and Protestant churches.

Women's suffrage is the right of women to vote and to be elected to an office. The right has generally been given after long political campaigns. In many countries, it was recognised before universal suffrage. Before the late 19th century, no woman had the right to vote in any political election.

The modern movement for women to gain the right to vote started in France in the late-18th century. The French Republic had been founded after a revolution, and political scientist Antoine Condorcet and activist Olympe de Gouges campaigned for women to be allowed to vote in the national election.

In early cases of women's suffrage, only those women who met certain requirements were given the right to vote in certain kinds of elections. In Sweden, there was conditional women's suffrage during the Age of Liberty (1718–1771). Unmarried women who owned property could vote in New Jersey from 1776 to 1807. In the 1792 election in Sierra Leone, all heads of household—one-third of whom were women—could vote.

Several British colonies recognised women's suffrage before most countries. The female descendants of the Bounty mutineers who lived on Pitcairn Islands could vote from 1838. This right was kept when they were resettled on Norfolk Island in 1856. Women in South Australia allowed to vote in local elections from 1861, and those on the Isle of Man could vote in parliamentary elections from 1881. In 1893, New Zealand became the first independent country to give all adult women the right to vote in national elections. The women in South Australia got the same right in 1894, and became the first to get the right to stand (run) for seats in parliament.

Many countries did the same soon after, following similar battles. Limited voting rights were also gained by women in several Western countries in the late 19th century, including Sweden, Finland and the United Kingdom. Russian Empire was the first European country to introduce women's suffrage, in 1906. It also elected the world's first female members of parliament in its 1907 elections. At that time it was a part of the Russian Empire. In the years before World War I, women in Norway (1913) and Denmark (1915) also won the right to vote, as did women in the other Australian states. In most other Western countries, women's suffrage came at the end of World War I.

Ceylon, now called Sri Lanka, recognised the right in 1931. It elected the world's first female head of government, Sirimavo Bandaranaike, in the country's 1960 elections. Women's suffrage was explicitly recognised as a right by the United Nations in 1979.

All content from Kiddle encyclopedia articles (including the article images and facts) can be freely used under Attribution-ShareAlike license, unless stated otherwise. Cite this article:
Women's suffrage Facts for Kids. Kiddle Encyclopedia.