Wyre is one of the Orkney Islands, lying south-east of Rousay. It is 311 hectares (1.20 sq mi) and 32 metres (105 ft) at its highest point. It is one of the smallest inhabited islands in the archipelago.

Orkney Ferries sail from the island to Tingwall on the Orkney Mainland, Egilsay and Rousay.

Bishop Bjarni grew up on Wyre, and was the son of Kolbein Hruga (see Cubbie Roo's Castle below), Collins Encyclopaedia of Scotland says of him that he:

"composed the only significant work of Norse poetry to have survived in the [Orkney] islands, his Lay of the Jomsvikings. He also played an important part in securing the canonisation of Earl Rognvald."

The poet Edwin Muir (1887–1959), known for his prominent part in the Scottish Renaissance, born in Deerness on Mainland, Orkney [1], spent much of his childhood on Wyre. In his autobiography he said of himself - "I'm an Orkneyman, a good Scandinavian", and commented that some of his happiest childhood years were spent here. 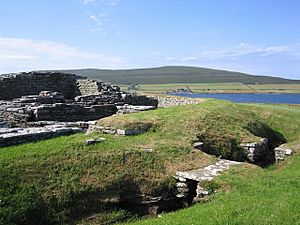 Cubbie Roo's Castle, built about 1150, is one of the oldest castles in Scotland and was mentioned in the Orkneyinga Saga. It takes its name from Kolbein Hruga who was said to have lived there.

In King Haakon's saga, it is mentioned that after the last Norse Earl of Orkney, Earl John, was murdered in Thurso, his killers fled to Wyre. They took refuge in the castle, which was so strong that the besiegers had to thrash out a deal with them to get them out. 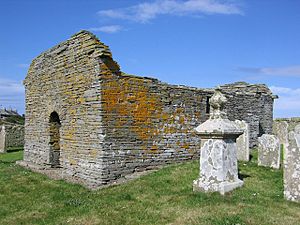 In the centre of the island is the roofless, but largely complete, twelfth-century St Mary's Chapel. Its architecture is Romanesque and demonstrates that the Norsemen, best known for their Viking raids, also had a cosmopolitan cultural influence. It has been partly restored.

Like most of Orkney, Wyre is made up of Old Red Sandstone of the Devonian period.

Wyre is also known for its grey and common seals, and for birdlife including divers and ducks.

All content from Kiddle encyclopedia articles (including the article images and facts) can be freely used under Attribution-ShareAlike license, unless stated otherwise. Cite this article:
Wyre, Orkney Facts for Kids. Kiddle Encyclopedia.