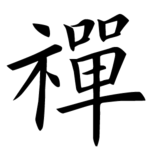 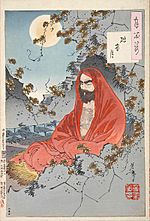 Zen is a Japanese school of Mahayana Buddhism. Buddhism was first brought to China from India, by Bodhidharma. It developed in China, into Zen, in the 6th century. From China it spread to Vietnam, Korea and Japan.

Zen is a Japanese word translated from the Chinese word Chán, which means "meditation".

Zen uses meditation to help practitioners go beyond simply thinking about Zen. The goal in Zen is to attain satori. This Japanese word translates as "enlightenment". The practice also includes using riddles, called Koans. Koans are also designed to help the practitioner not just engage in rational thought. The traditional Japanese place to learn Zen is a Zen monastery.

Japanese Zen scholars such as D.T. Suzuki became well known in the West. Suzuki spent over fifty years teaching Zen to the world with a series of books in English.In the 1960s in California, Aldous Huxley, Alan Watts, and others promoted the philosophy. From there it spread to many parts of the western world. Zen is now well established outside of Japan and China. Many Zen centers exist in the US and Europe.

Zen is now associated with some design styles, like Minimalism. The Japanese gardens found at Zen monasteries in Japan are an example of this style. They are called Zen rock gardens. They are not directly part of the teachings of Zen.

All content from Kiddle encyclopedia articles (including the article images and facts) can be freely used under Attribution-ShareAlike license, unless stated otherwise. Cite this article:
Zen Facts for Kids. Kiddle Encyclopedia.