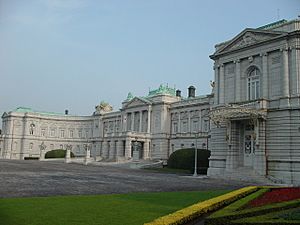 The 19th G7 summit was a meeting in 1993 for the leaders of Canada, the European Commission, France, Germany, Italy, Japan, the United Kingdom and the United States.

The international group of leaders were together in Japan from July 7-9, 1993. The meetings were held at the State Guesthouse (Akasaka Palace) in Tokyo.

The Tokyo summit of the Group of Seven (G7) was the 19th meeting in a series which began in 1976.

This was the first international summit for Prime Minister Campbell and for President Clinton.

The G7 leaders agreed to work on common strategies for global economic growth; and they discussed

The group of leaders called for an "international agreement" to "protect forests." There is little evidence of follow-up.

All content from Kiddle encyclopedia articles (including the article images and facts) can be freely used under Attribution-ShareAlike license, unless stated otherwise. Cite this article:
19th G7 summit Facts for Kids. Kiddle Encyclopedia.