The 2009 Fiordland earthquake struck the South Island of New Zealand with a magnitude of 7.8 at 9:22 pm (NZST) on 15 July. The earthquake was centred in the remote region of Fiordland, with the epicentre located 150 km (93 mi) west-north-west of Invercargill near Dusky Sound in Fiordland National Park, at a depth of 12 km (7.5 mi). It is among the largest New Zealand earthquakes to occur, including the Culverden/Kaikoura earthquake in 2016 and the 1931 Hawke's Bay earthquake, which both had a magnitude of 7.8.

The main shock was a reverse fault (thrust), with the Indo-Australian Plate subducting beneath the Pacific Plate. The earthquake lifted a large area of land around the epicenter approximately 1 metre.

New Zealand's Institute of Geological and Nuclear Sciences (GNS Science) initially measured the earthquake at magnitude 6.6, but later revised the magnitude to 7.8.

The reported energy release was compared to "500 million tonnes of TNT,[and] 25,000 times more powerful than the atomic bomb dropped on Nagasaki in 1945".

The quake twisted New Zealand's South Island, with Puysegur Point, on the Southwestern tip of the island, moving 30 cm closer to Australia (westward); Te Anau moved 10 cm, Bluff 3 cm and Dunedin 1 cm. It is also believed to have caused an increased stress in the southern, offshore part of the Alpine Fault.

A considerable number of aftershocks were recorded. 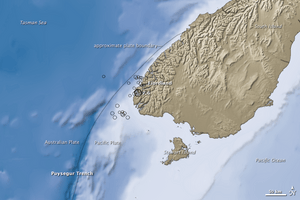 NASA map showing epicentre of earthquake and its aftershocks

The earthquake was felt throughout the South Island, and in the lower North Island as far as New Plymouth. No injuries or fatalities were reported, and it caused only minor damage. Power outages were experienced in several parts of the South Island. Over 200 claims for damage have been listed with the Earthquake Commission, New Zealand's agency for earthquake compensation.

Tsunami warnings were issued soon after the earthquake by authorities in New Zealand and Australia, as well as the Pacific Tsunami Warning Center in Hawaii. Civil defence officials in Southland also issued a 'potential tsunami' warning, stating their concerns about widely varying measurements of the earthquake. Reacting to the Pacific warnings, about fifty residents and tourists on Lord Howe Island were evacuated, and in Sydney a theatre in Bondi Beach was evacuated, and residents told to keep away from the shore. In the event, waves recorded along New Zealand's western coastline measured at one metre, peak to trough, in the Haast area. (An amplitude of 17 cm) The tsunami warnings were subsequently cancelled or reduced.

All content from Kiddle encyclopedia articles (including the article images and facts) can be freely used under Attribution-ShareAlike license, unless stated otherwise. Cite this article:
2009 Fiordland earthquake Facts for Kids. Kiddle Encyclopedia.