Kids Encyclopedia Facts
This page is about the footpath. For the adjacent roadway, see 49-Mile Scenic Drive.

In 2019, Peter Hartlaub and Heather Knight wrote a series of articles for the San Francisco Chronicle about a proposed new scenic route. They started by doing the existing Scenic Drive via a variety of non-car modes of transport on September 4, 2019, to figure out what works and what doesn't when one is not driving. After more research and debate, they published a new route on November 15, 2019.

While the Scenic Drive starts at City Hall, the Scenic Route starts at the San Francisco Chronicle building, 5th and Mission. Like the Drive, the Route proceeds counter-clockwise around the city.

From 5th and Mission, go northwest on 5th to Market Street. Southwest on Market to Fulton, then west past the Pioneer Monument to Larkin. North on Larkin, skirting Civic Center, to Post. East on Post to Grant, then north on Grant through the Dragon Gate at the entrance to Chinatown. At California turn west and proceed to Mason. East on Washington, one block south on Powell, then east on Clay through the heart of Chinatown. At Kearny turn north, and angle left on Columbus. North on Grant again through North Beach. West on Lombard, and north on Mason all the way to the Bay at Jefferson Street. Take Jefferson west through Fisherman's Wharf to Hyde, south one block to the cable car turntable, then west on Beach past Ghirardelli Square.

From Beach you wiggle south on Larkin, west on North Beach, south on Polk, then west on Bay along the edge of Fort Mason. North on Laguna and west on Beach, then take Marina Boulevard alongside Marina Green. Zig-zag through the Marina district by going south on Scott, west on Beach (check out the Palace of Fine Arts), south on Baker, east on Bay, south on Divisadero, and west on Chestnut. At the end of Chestnut turn south on Lyon for a block and then enter the Presidio at the Lombard Gate.

A path takes you past Lucasfilm's Letterman Digital Arts Center - look for the fountain with a life-sized statue of Yoda. Then follow Letterman Drive, Lincoln Boulevard, and Funston Avenue to Moraga Avenue. This takes you past the historic Presidio Officer's Club, one of the oldest buildings in San Francisco. Turn north on Montgomery Street between the Presidio Theater and the bowling alley, then west on Sheridan. This turns into Lincoln and takes you past the San Francisco National Cemetery. At Long Avenue you can optionally do an out-and-back to see Fort Point. Continue on Lincoln to the Golden Gate Overlook, which offers an excellent view of the Golden Gate Bridge. Across from the overlook find Ralston Avenue. South on Ralston to Greenough, Kobbe, and Harrison, which takes you to Washington Boulevard. There's another nice overlook here called Immigrant Point. Washington winds south and east along the high ridgeline of the Presidio, turns into Arguello, and exits the Presidio at Arguello Gate.

A block down from the gate you can do a little spite-detour through Presidio Terrace, a privately owned loop road lined with mansions. Then go another block south to Lake Street. West on Lake to 8th Avenue, south two blocks to Clement, east through a nice retail district to Arguello again, then south to Golden Gate Park. 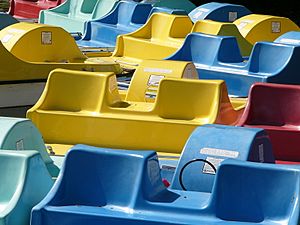 Pedal boats for rent at the Stow Lake Boathouse

Conservatory Drive West and John F. Kennedy Drive loop around the Conservatory of Flowers. Turn south on Nancy Pelosi Drive, past the AIDS Memorial Grove, to Martin Luther King Jr. Drive. Go northwest a bit, then turn right onto Music Concourse Drive. This loops past the Academy of Sciences the de Young Museum, and the Japanese Tea Garden, then back to MLK. A path along the west side of the Tea Garden takes you up a hill to Stow Lake. Follow Stow Lake Drive to the Boathouse, then down to John F. Kennedy Drive again. JFK takes you west past Lloyd Lake and Spreckels Lake, then turn north and exit the park via 36th Avenue.

Take 36th north to Balboa, then turn west and enjoy another very interesting retail district including the classic Balboa Theater. At 46th turn north, then turn left on Point Lobos Avenue which descends past the Sutro Baths ruins and Cliff House, then turns into the Great Highway. There's a path next to the highway, or you can walk on the beach. Go south a couple miles to Taraval, then turn east. At 33rd Avenue turn south. Find the entrance to Pine Lake / Stern Grove park, then go east through the park all the way to 19th Avenue. 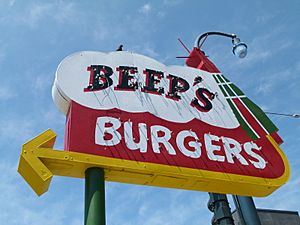 Go a block south on 19th (carefully, there's a lot of traffic), then turn southeast on Ocean. At Cerritos Avenue turn right, left on Moncada Way, veer left onto Urbano Drive, right on Borica Street, then immediately right again onto Entrada Court. This takes you to the 28-foot-tall Urbano Sundial. Go out the other leg of Entrada Court back to Borica, then continue south to Holloway Avenue and turn east. At Lee Avenue turn north, which in one block takes you to Beep's Burgers at Ocean Avenue. Go east on Ocean two blocks to Frida Kahlo Way, turn north past City College, jog east a block on Judson, then north on Gennessee to Hearst. East on Hearst to Baden, north a block to Monterey, then east. Take Diamond north to Wilder, then do a little trapezoid on Wilder / Natick / Chenery back to Diamond. Continue west on Chenery to the entrance to Glen Canyon Park.

Footpaths through Glen Canyon take you all the way up to Portola Drive. Go west a bit, then turn north on Twin Peaks Boulevard which ascends via a series of hairpin turns to Twin Peaks, and then down past Tank Hill. Follow Clayton Street a couple blocks north to Ashbury Street, then go north on that to the famous Haight-Ashbury District. East on Haight past Buena Vista Park to Divisadero, then north to Fulton. Take Fulton east to Alamo Square where you can check out the famous Painted Ladies (colorful Victorian houses). From the southwest corner of the park take Scott Street south to Haight. Follow The Wiggle by going east on Haight, south on Pierce, east on Waller, and south on Steiner. At Duboce Avenue turn west along Duboce Park, then south on Castro through the scenic and historic Castro District.

Go east on 19th Street to the edge of Dolores Park, then north on Church Street to 16th Street. East a block on 16th takes you to Mission Dolores, the oldest building in the city. Continue east on 16th to Mission Street, then south a block and a bit to Clarion Alley which is lined with ever-changing murals. Clarion takes you to Valencia; turn south, go to 21st Street, east a block to Mission Street again, then south. Valencia and Mission are both vibrant commercial districts, but very different from each other. 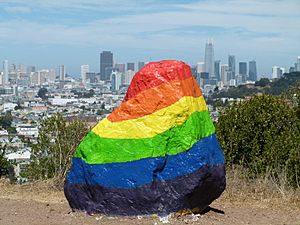 Descend Cortland to Bayshore, north to Oakdale, then east. Oakdale eventually takes you to 3rd Street where you can see the Bayview Opera House. Go north on 3rd, carefully, to Cargo Way, jog east to Illinois, then north over a bridge across India Basin. Continue on Illinois to 24th Street, go west a few blocks to Minnesota Street, north a block, then back east on 23rd to 3rd Street.North on 3rd to 20th Street, east a block to Illinois again, north to Terry Francois Boulevard. Follow this along the bay shore and past the Chase Center basketball arena. The street eventually turns west at McCovey Cove and takes you to 3rd Street, where you can cross the Lefty O'Doul Bridge to Some Big Corporation Park, home of the San Francisco Giants.

Past the ballpark turn northeast on King Street, which veers north and becomes The Embarcadero. There a nice wide sidewalk which unlike most, cyclists are allowed to use. At the Ferry Building turn southwest onto Market Street. Go a block southeast on Main, then southwest again on Mission. At 1st Street jog left half a block to Minna Street, which runs alongside the Transbay Transit Center. Turn left on 2nd and right on Howard. Go past the SF MoMA to the Moscone Center convention complex. Wend your way through the complex to the northwest, coming out on Mission Street across from the Contemporary Jewish Museum. Then southwest one more block to 5th Street. The Route ends where it began, at the Chronicle Building, after traveling 49.4 miles (79.5 km).

All content from Kiddle encyclopedia articles (including the article images and facts) can be freely used under Attribution-ShareAlike license, unless stated otherwise. Cite this article:
49-Mile Scenic Route Facts for Kids. Kiddle Encyclopedia.