A Brief History of Time facts for kids

A Brief History of Time (1988) is a book written by the scientist and mathematician Stephen Hawking. This book is about physics, or the study of laws that predict how things work in the universe. It is also about cosmology, or how we see the universe and how the universe exists.

In this book, Hawking talks about many theories in physics. Some of the things that he talks about are the history of physics, gravity, how light moves in the universe, space-time, elementary particles (very small objects that make up things in the universe), black holes, the Big Bang (the theory that the universe started from one point), and time travel (the idea that travel can be done to the past and to the future.)

This book is very popular and well-known. This book was on the London Sunday Times bestseller list for over 4 years.

Chapter 1: Our Picture of the Universe 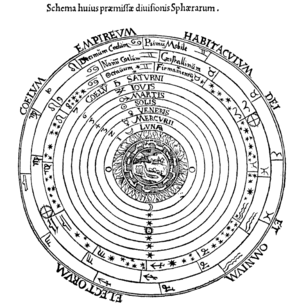 A picture of what Ptolemy thought about the location of the planets, stars, and sun.

In the first part of the book, Hawking talks about the history of physics. He talks about the ideas of philosophers such as Aristotle and Ptolemy. Aristotle, unlike many other people of his time, thought that the Earth was round. He also thought that the sun and stars went around the Earth. Ptolemy also thought about how the sun and stars were located in the universe. He made a planetary model that described Aristotle's thinking. Today, it is known that the opposite is true; the earth goes around the sun. The Aristotle/Ptolemy ideas about the position of the stars and sun was disproved in 1609. The person who first thought of the idea about the Earth going around the sun was Nicholas Copernicus. Galileo Galilei and Johannes Kepler, two other scientists, helped to prove that Copernicus's idea was right. They looked at how the moons of some planets moved in the sky, and they used this to prove Copernicus right. Isaac Newton also wrote a book about gravity, which helped to prove Copernicus's idea right. 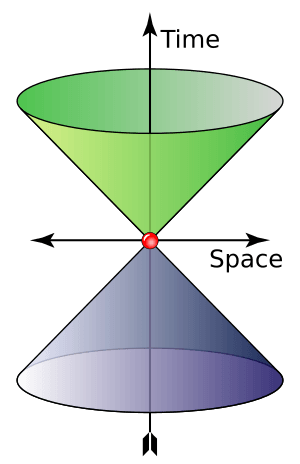 This is a light cone

In this chapter, Hawking talks about space and time. He describes the motion of planets moving around the sun and how gravity works between the planets and the sun. He also talks about the ideas of absolute rest and absolute position. These ideas are about the thought that events stay in place over a period of time. This was found not to be true by Newton's laws of gravity. The idea of absolute rest did not work when objects move very fast (at the speed of light, or light speed). 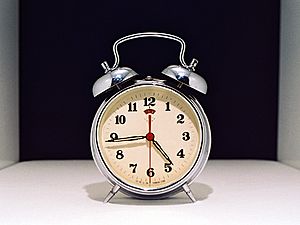 Einstein said that time was not absolute, or always the same

After talking about light, Hawking talks about time in Einstein's theory of relativity. One prediction that Einstein's theory makes is that time will go by slower when something is near huge masses. However, when something is farther away from the mass, time will go by faster. Hawking used the idea of two twins living at different places to describe his idea. If one of the twins went to live on a mountain, and another twin went to live near the sea, the twin who went to live on the mountain would be a little bit older than the twin who went to live at the sea.

The Big Bang is shown here. From the picture, we can tell the universe is getting bigger over time

In this chapter, Hawking talks about the expanding universe. The universe is getting bigger over time. One of the things he uses to explain his idea is the Doppler shift. The Doppler shift happens when something moves toward or away from another object. There are two types of things that happen in Doppler shift - red shifting and blue shifting. Red shifting happens when something is moving away from us. This is caused by the wavelength of the visible light reaching us increasing, and the frequency decreasing, which shifts the visible light towards the red/infra-red end of the electromagnetic spectrum. Red-shift is linked to the belief that the universe is expanding as the wavelength of the light is increasing, almost as if stretched as planets and galaxies move away from us, which shares similarities to that of the doppler effect, involving sound waves. Blue shifting happens when something is moving toward us, the opposite process of red-shift, in which the wavelength decreases and frequency increases, shifting the light towards the blue end of the spectrum. A scientist named Edwin Hubble found that many stars are red shifted and are moving away from us. Hawking uses the Doppler shift to explain that the universe is getting bigger. The beginning of the universe is thought to have happened through something called the Big Bang. The Big Bang was a very big explosion that created the universe.

Here is a picture of a light wave. 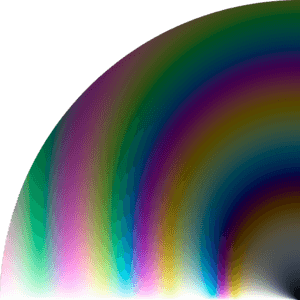 Light waves have crests and troughs. The highest point of a wave is the crest, and the lowest part of the wave is a trough. Sometimes more than one of these waves can interfere with each other - the crests and the troughs line up. This is called light interference. When light waves interfere with each other, this can make many colors. An example of this is the colors in soap bubbles.

Quarks and other elementary particles are the topic of this chapter.

Quarks are very small things that make up everything we see (matter). There are six different "flavors" of quarks: the up quark, down quark, strange quark, charmed quark, bottom quark, and top quark. Quarks also have three "colors": red, green, and blue. There are also anti-quarks, which are the opposite of the regular quarks. In total, there are 18 different types of regular quarks, and 18 different types of anti quarks. Quarks are known as the "building blocks of matter" because they are the smallest thing that make up all the matter in the universe.

A particle of spin 1 needs to be turned around all the way to look the same again, like this arrow.

This is a proton. It is made up of three quarks. All the quarks are different colors because of confinement.

Particles with a spin of 0, 1, or 2 move force from one particle to another. Some examples of these particles are virtual gravitons and virtual photons. Virtual gravitons have a spin of 2 and they represent the force of gravity. This means that when gravity affects two things, gravitons move to and from the two things. Virtual photons have a spin of 1 and represent electromagnetic forces (or the force that holds atoms together).

Besides the force of gravity and the electromagnetic forces, there are weak and strong nuclear forces. Weak nuclear forces are the forces that cause radioactivity, or when matter emits energy. Weak nuclear force works on particles with a spin of 1/2. Strong nuclear forces are the forces that keep the quarks in a neutron and a proton together, and keeps the protons and neutrons together in an atom. The particle that carries the strong nuclear force is thought to be a gluon. The gluon is a particle with a spin of 1. The gluon holds together quarks to form protons and neutrons. However, the gluon only holds together quarks that are three different colors. This makes the end product have no color. This is called confinement.

Some scientists have tried to make a theory that combines the electromagnetic force, the weak nuclear force, and the strong nuclear force. This theory is called a grand unified theory (or a GUT). This theory tries to explain these forces in one big unified way or theory.

A picture of a black hole and how it changes light around it.

Black holes are talked about in this chapter. Black holes are stars that have collapsed into one very small point. This small point is called a singularity. Black holes suck things into their center because its gravity is very strong. Some of the things it can suck in are light and stars. Only very large stars, called super-giants, are big enough to become a black hole. The star must be one and a half times the mass of the sun or larger to turn into a black hole. This number is called the Chandrasekhar limit. If the mass of a star is less than the Chandrasekhar limit, it will not turn into a black hole; instead, it will turn into a different, smaller type of star. The boundary of the black hole is called the event horizon. If something is in the event horizon, it will never get out of the black hole.

In this chapter, Hawking talks about his bet with another scientist, Kip Thorne. Hawking bet that black holes did not exist, because he did not want his work on black holes to be wasted. He lost the bet.

Disorder, also known as entropy, is related to black holes. There is a scientific law that has to do with entropy. This law is called the second law of thermodynamics, and it says that entropy (or disorder) will always increase in an isolated system (for example, the universe). The relation between the amount of entropy in a black hole and the size of the black hole's event horizon was first thought of by a research student (Jacob Bekenstein) and proven by Hawking, whose calculations said that black holes emit radiation. This was strange, because it was already said that nothing can escape from a black hole's event horizon.

This problem was solved when the idea of pairs of "virtual particles" was thought of. One of the pair of particles would fall into the black hole, and the other would escape. This would look like the black hole was emitting particles. This idea seemed strange at first, but many people accepted it after a while.

Chapter 8: The Origin and Fate of the Universe

How the universe started and how it might end is talked about in this chapter.

Inflationary models are also discussed in this chapter, and so is the idea of a theory that unifies quantum mechanics and gravity.

Each particle has many histories. This idea is known as Feynman's theory of sum over histories. A theory that unifies quantum mechanics and gravity should have Feynman's theory in it. To find the chance that a particle will pass through a point, the waves of each particle needs to be added up. These waves happen in imaginary time. Imaginary numbers, when multiplied by themselves, make a negative number. For example, 2i X 2i = -4.

All content from Kiddle encyclopedia articles (including the article images and facts) can be freely used under Attribution-ShareAlike license, unless stated otherwise. Cite this article:
A Brief History of Time Facts for Kids. Kiddle Encyclopedia.