Abberton Reservoir is a freshwater storage reservoir in eastern England near the Essex coast. It is the largest freshwater body in the county and the fourth largest reservoir in England, with an area of 700 hectares (1,700 acres). It is a pumped storage reservoir, with water pumped into it from the River Stour. It lies 6 km (3.7 mi) south-west of Colchester near the village of Layer de la Haye. It is owned and managed by Essex and Suffolk Water, part of Northumbrian Water Group. Plans to increase the capacity of Abberton reservoir to 41,000 megalitres (9.0×109 imp gal) by raising its bank height were completed in 2013.

The reservoir is important for its breeding cormorants, wintering and moulting waterfowl, and migrating birds. It is an internationally important wetland, designated as a Ramsar site, Site of Special Scientific Interest and Special Protection Area, and it is listed in the Nature Conservation Review. A small part of the site is managed by the Essex Wildlife Trust.

In WWII, the reservoir was mined to deter invading seaplanes, and it was used by the RAF's 617 Squadron ("The Dam Busters") for practice runs for the bombing of the German dams in the Ruhr

Abberton reservoir lies 6 km (3.7 mi) south-west of Colchester near the village of Layer de la Haye and less than 8 km (5.0 mi) from the coast. It was created between 1935 and 1939 to help meet the demand for water in Essex by damming the Layer Brook, but most of its water is pumped in from the River Stour, 14 km (8.7 mi) to the south. The 690 m (2,270 ft) dam wall is constructed of earth with an impermeable puddle clay core constructed using the underlying London clay, and the reservoir originally held 25,000 megalitres (5.5×109 imp gal) of water.

The reservoirs current owners, Essex and Suffolk Water, part of the Northumbrian Water Group, recognised that the reservoir's capacity was insufficient to meet growing local demand, and initiated a £140 million project to increase the capacity of Abberton reservoir by 58% to 41,000 megalitres (9.0×109 imp gal) by raising its banks. The scheme was completed between 2010 and 2013, and also enabled water from the Ouse, 141 km (88 mi) distant in Norfolk. to be transferred to the reservoir via the Stour. This necessitated building a new pipeline from the Ouse to the Stour, and replacing the existing link from the Stour to Abberton with new, higher capacity, pipelines.

The Western and Central sections of Abberton reservoir have natural shores with common reed and willow close to the water, grading into damp grassland and cultivated fields. The Main part originally had concrete borders, but 12 kilometres (7.5 mi) of this apron and the perimeter road were broken up in the expansion between 2010 and 2013. Most of the edge was re-profiled to make it more attractive to water birds, and along with 200 hectares (490 acres) it is now managed by Suffolk Water and the Essex Wildlife Trust to increase biodiversity.

The new design created pools around the borders of the reservoir and allowed for marshland creation west of the Layer de la Haye causeway. A culvert under the causeway was blocked allowing the water level in the western sections to be retained independently of the main body of water. 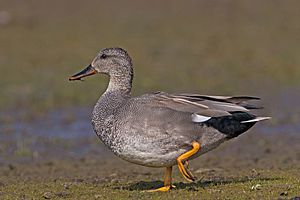 Abberton had been a winter roosting site for cormorants from the 1950s, and became the first tree-nesting colony in England when eight pairs bred there in 1981. There were 584 pairs by 1993, although numbers have since declined to around 180 pairs. Little egrets first nested in 2014, with 31 pairs by 2019, and a pair of cattle egrets bred in 2020. The area holds around 20 pairs each of Cetti's warbler and nightingale. Typical farmland species such as corn bunting, yellowhammer and barn owl also breed in the protected areas. Up to eight pairs of little ringed plovers breed on the re-profiled margins of the reservoir.

Abberton is a major site for wintering wildfowl, and has the largest numbers of any inland water body, typically holding around 35,000 individual birds, but rising to well over 40,000 in hard winters. It is of international importance for wintering gadwall, shoveler and wigeon, and national importance for mute swan, teal, pochard, tufted duck, goldeneye, coot and great crested grebe. Many ducks also moult during their stay at the reservoir. There are significant numbers of waders in winter, including black-tailed godwits, ruff, lapwings and golden plovers. In winter, European bitterns regularly occur at the western end of the reservoir, and hen harriers, merlins, peregrine falcons and marsh harriers hunt over the bordering grassland, and the last species has sometimes summered. Its proximity to the coast means that Abberton may hold scarcer species like smew and long-tailed duck, and rarities including blue-winged teal (19996), Britain's first canvasback (1997–2001) and lesser scaup (2004–2005). Rare terns include gull-billed, which bred in 1949 and 1950, Caspian, whiskered and white-winged black, five of the last species being present together in May 2019. Other recent rarities include ortolan bunting (2019), Bonaparte's gull (2017, 2019) Franklin's gull (2016) and desert wheatear (2012). There have been multiple records of red-footed falcons and red-rumped swallows over the years.

Abberton has operate a bird ringing scheme for more than 70 years, 90,000 ducks having been ringed in that period, including 40,000 teal. Recoveries of ringed birds have established national longevity records for 10 species, including wigeon (34 years), pochard (22) and gadwall (21). 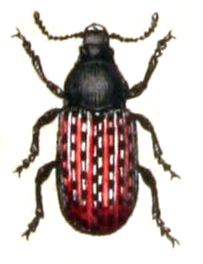 Abberton has otters, water voles and brown hares, and eight species of bats, and other vertebrates include the common lizard, grass snake and great crested newt. Insects present include two rare weevils, Rhynchites auratus, which feeds on blackthorn, and a fungus specialist, Anthribus fasciatus.

Abberton was designated a Special Protection Area on 5 December 1991as a result of its over-wintering populations of golden plover, gadwall, shovelers and teal and for its breeding population of cormorants. In addition there are significant numbers of black-tailed godwit, lapwing, coot, goldeneye e (duck)|goldeneye]], tufted duck, pochard, pintail, wigeon and great crested grebe.

It is a Site of Special Scientific Interest, and an internationally important wetland designated as a Ramsar site.

It is listed in the Nature Conservation Review, and small part of the site is managed by the Essex Wildlife Trust. 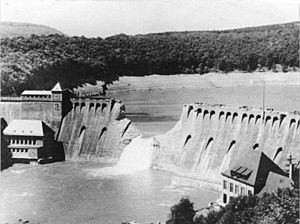 Abberton reservoir was filled just before the start of WWII, and the Ministry of Defence were concerned that it might be used by German seaplanes as part of an invasion. To prevent this, 312 naval mines, anchored by steel cables, were laid in a grid pattern across the reservoir. Steel cables were stretched across the part of the reservoir nearest to the pumping station, since exploding mines might have damaged the building. Some were inadvertently detonated by ice, but most were exploded after the war by soldiers firing from the banks.

The reservoir was used by the RAF's 617 Squadron ("The Dam Busters") for practice runs for the bombing of the German dams in the Ruhr during World War II (Operation Chastise). The reservoir was intended to simulate the Eder Dam in Germany. Lancaster bombers fitted with special bouncing bombs designed by Barnes Wallis were used in these trials, and military police closed the causeway whilst the practice runs took place. The last practice flight to Abberton was a full dress rehearsal of the Ruhr attack and took place on the night of May 14, 1943, and the actual attack on the dams in Germany took place two nights later on May 16, 1943. The Eder dam was attacked and breached after the Möhne dam had been successfully destroyed. 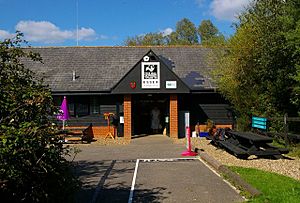 The Essex Wildlife Trust has a car park and nature reserve at the north end of the Layer de la Haye causeways. There is a visitor centre with a shop, cafē, toilets and play area, and three bird hides, two looking south and east over the Main section, and one in woodland. The visitor centre and reserve are open 9.30am-4.00pm Thursday-Monday year round.

The Western and Central sections can be viewed from the Layer Breton and Layer de la Haye causeways, the latter also giving views of the Main section. There is no public access to the Western section, but a car park at the southern end of the Layer de la Haye causeway gives access to a viewing screen and scrapes (birds' nests in shallow depressions) for waders on the Main Section. Parts of the rest of the Main section can be seen from public footpaths and St Andrews Church in Abberton village.

All content from Kiddle encyclopedia articles (including the article images and facts) can be freely used under Attribution-ShareAlike license, unless stated otherwise. Cite this article:
Abberton Reservoir Facts for Kids. Kiddle Encyclopedia.