Kids Encyclopedia Facts
This page is about the census-designated place in Maryland. For other uses, see Accokeek.

Accokeek, "at the edge of the hill" in Algonquin, is a census-designated place (CDP) located in the US state of Maryland and the county of Prince George's. The CDP is located on the Potomac River, borders Charles County and is approximately 17 miles from Washington, D.C.. It is a part of the Washington metropolitan area. The population of the CDP, as of the 2010 United States Census was 10,573, making it the 118th most populous place in the state of Maryland.

While the area around Accokeek was occupied by Native Americans since approximately 2,000 BCE, John Smith was the first European to settle the area in 1608. In 1990, the United States Census Bureau officially made Accokeek a CDP.

The area around Accokeek had been occupied since around 2000 BC; however, the first permanent village was established in c. 1200 AD by the Piscataway tribe. Captain John Smith was the first European to see the Accokeek area. In 1608, he sailed the Potomac River and found the Moyaone village. At the time of the discovery, Moyaone was the seat of government for the Piscataway Tribe. The village of Moyaone disbanded and the population migrated to other tribes before other Europeans settled the area.

In 1861, Accokeek was still rural, and agriculture was the main economic factor for the place. Tobacco was the main crop planted. During the American Civil War (1861–1865), Accokeek took the side of the Confederacy. According to the 1860 Census, the area around Accokeek had a slave population of 1,600 (52.6%). There were multiple Confederate spies in the area, including Thomas Harbin who open a hotel in the area and had plans to kidnap then-President Abraham Lincoln.

Henry and Alice Ferguson settled in Accokeek when they purchased Hard Bargain Farm overlooking the Potomac River in 1922 as a vacation retreat. Between 1935–39 Alice Ferguson initiated archaeological excavations. A fort from the Susquehannock people, which was demolished in 1675, was found. In 1957, US Senator Frances P. Bolton founded the Accokeek Foundation. The Foundation was used to purchase 200 acres (81 ha) of land in Piscataway Park to help preserve the area.

In 1960, the Washington Suburban Sanitary Commission (WSSC) wanted to build a water treatment plant in Mockley Point, which was Accokeek shoreline. Since it would disrupt the view of Mount Vernon and Fort Washington Park, various people and organizations protested against it. In 1961, a law was signed by President John F. Kennedy in order to designed 133 acres (54 ha) around Mockley Point as a national landmark. Both the Accokeek Foundation and the Alice Ferguson Foundation donated another 505 acres (204 ha) to the landmark. As a result, WSSC was not allowed to build the plant there, however a plant was built in the 1960s in the surrounding area.

In 1990, Accokeek officially became a CDP when the US Census Bureau defined the place's boundaries. In 2008, eight people were killed in an illegal street race.

There is more precipitation in the area during the months of May and July (4.1 inch; 104 mm) than in any other month; Accokeek currently has an annual precipitation of 39 inches (1,009 mm) each year. July is the hottest month, on average; the hottest recorded temperature occurred in July 1954 and September 1983. January is the coldest month, and the lowest recorded temperature was recorded in January 1950.

As of the 2010 census, there were 10,573 people, 3,601 households, and 2,835 families residing in the city. The population density was 385.5 inhabitants per square mile. There were 3,816 housing units at an average density of 139.1 per square mile. Accokeek is a part of the Washington Metropolitan Area, in which Accokeek contains approximately 0.19% of the MSA's population.

There were 3,601 households of which 34.4% had children under the age of 18 living with them, 62.8% were married couples living together, 11.4% had a female householder with no husband present, 4.5% had a male householder with no wife present, and 21.3% were non-families. 16.8% of all households were made up of individuals and 19.9% had someone living alone who was 65 years of age or older. The average household size was 2.94, and the average family size was 3.29.

The following sites located at Accokeek are included on the National Register of Historic Places: 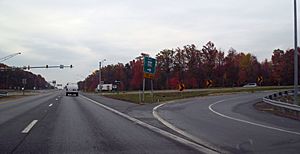 A picture from a vehicle located on MD 210, with an exit to MD 228 located on the right

The Washington Metropolitan Area Transit Authority's Metrobus system operates bus service to Accokeek on the W19 and W13 routes, which can be taken to the Southern Avenue Metrorail station and downtown Washington, D.C. respectively. The State of Maryland's MTA Maryland operates two express commuter buses, routes 640 and 650, which operate from Waldorf or La Plata, stopping in Accokeek en route to Washington, D.C.

There are currently no Interstate Highways in Accokeek; however there are four state highways:

All content from Kiddle encyclopedia articles (including the article images and facts) can be freely used under Attribution-ShareAlike license, unless stated otherwise. Cite this article:
Accokeek, Maryland Facts for Kids. Kiddle Encyclopedia.