Southern Maryland in popular usage is composed of the state's southernmost counties on the "Western Shore" of the Chesapeake Bay in the state of Maryland. This region includes all of Calvert, Charles, and St. Mary's counties and sometimes the southern portions of Anne Arundel and Prince George's counties. Despite that the state's southernmost counties are actually on the Delmarva Peninsula, they are not included in most definitions of "Southern Maryland". 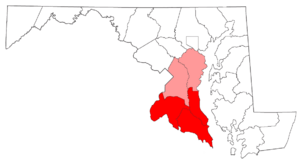 Southern Maryland was originally inhabited by Piscataway Indians. Captain John Smith explored the area in 1608 and 1609. In 1634 St. Mary's City, at southern Maryland's lower tip was the site of Maryland's first colonial settlement. It was also the first Roman Catholic English settlement in North America. Today, two thirds of the original site is now a large living history museum complex and archeological research area and the other third is now the campus of St. Mary's College of Maryland.

The colony originally focused on tobacco farming and was very successful although disease was a problem and many settlers died until immunities built up in the population. Religious tensions and also periods of open conflict also continued to be a major challenge.

St. Mary's City is widely considered to be the birthplace of religious freedom in North America. The colony there started under a mandate of religious tolerance in a time when England was anything but religiously tolerant. There was still much religious strife in St. Mary's City that led to passage of one of the earliest laws requiring religious tolerance which was written and passed there by the Maryland colonial assembly. The first woman to ever request a vote in English speaking North America is very likely to have occurred there as well.

The fall of St. Mary's City

After 61 years as Maryland's capital an uprising of Protestants put an end to religious tolerance, overthrowing the old Catholic leadership and putting an end to colonial St. Mary's City itself, moving the colonial capital to Annapolis.

St. Mary's was abandoned as a settlement, but tobacco and later, also wheat plantations expanded there and in Southern Maryland as a whole during the slavery era.

The plantation system is believed to have contributed to rural poverty even before the end of slavery as it depressed the local labor market and stunted other forms of economic growth. Poverty and ignorance grew and the area became known for lack of education and rural impoverishment, except for a tiny handful of plantation owners.

During the American Civil War, wartime sympathies, although divided in Maryland, leaned much more strongly towards the South, especially in Southern Maryland. From the war's beginning, however, large numbers of Union occupying troops and patrolling river gunboats prevented the state's secession, although nighttime smuggling across the Potomac River with Virginia took place. John Wilkes Booth was helped by some people in his escape through the area after killing President Abraham Lincoln.

Southern Maryland was traditionally a rural, agricultural, oyster fishing and crabbing region; linked by passenger and freight steamboat routes. These steamboat routes operated on the Chesapeake Bay and major rivers until the 1930s before the building of highways and the Harry W. Nice Memorial Bridge on U.S. Highway 301. (The latter highway was named after Robert Crain, an attorney who owned the state's largest farm, Mount Victoria, and who campaigned for the road's construction). Weekend excursion boats also carried Washingtonians to small amusement parks and amusement pavilions at numerous shore locations. From 1949 (1943 in some places) to 1968, the region was known for its poverty and its slot machine gambling.

There was a lot of rural poverty at the time, and the gambling came to be seen as a blight and was finally outlawed by Governor J. Millard Tawes and the state legislature. A local political figure, St. Mary's County politician J. Frank Raley, Jr. organized a slate of local candidates with the platform of challenging the old political machine and lifting the region out of its generations long poverty.

Raley led the way in ending the region's isolation by having a series of bridges built and roads expanded into highways. Raley is largely credited for enabling the development of modern St. Mary's County.

He was falsely accused of working to end gambling outright in the region, which ended in his defeat and his official political career. In fact he had supported a referendum on gambling which would have put the decision directly in the hands of voters. He continued nevertheless lobbying on behalf of the Southern Maryland region and sitting on development boards and so continued to have a major influence in favor of economic development in the region for the rest of his life.

During recent times, the region experienced suburban development as the Washington suburbs expanded southward. This expansion took place primarily in Prince George's County, and around Waldorf (a regional shopping hub) and St. Charles (a planned community in Charles County), Lexington Park (St. Mary's County) and Prince Frederick (Calvert County). This expansion of the Washington DC metropolitan area has caused much of southern Maryland's formerly predominant southern culture to fade giving way to a rapidly growing northeastern culture that is found throughout much of the Northeast Megalopolis. However, as noted, land-use maps show that the area is still primarily low-density.

Many southern Marylanders work at Andrews Air Force Base, the U.S. Census Bureau or at Patuxent River Naval Air Station and its related industries. Other smaller industries include a nuclear power plant and a liquified natural gas terminal (both in Lusby), a Naval ordnance test ground (at Indian Head), electric power plants (at Aquasco and Morgantown) and an oil terminal (at Piney Point). The beautiful towns of Solomons Island and Chesapeake Beach are favorite weekend tourist resorts. Maryland International Raceway and Budds Creek Raceway near Chaptico attract many auto and motocross racing enthusiasts.

While the steamboats are long gone, more than three-quarters of the land area is still rural, a mixture of forest and farmland. The growing of tobacco, once a dominant crop, has declined greatly because of state government farm buyouts during the 1990s.

St. Mary's County is home to Amish and Mennonite communities. In addition, two state recognized tribes exist Piscataway Native American tribe, tribes that live along the Potomac River and Chesapeake Bay in southern Maryland (see We-Sorts). Fishing, boating and crabbing are popular activities in this region; large marinas are found in the Solomons Island and North Beach areas. However, the population of fish and other marine life is threatened by pollution and environmental factors. Ancient marine fossils are abundant at Calvert Cliffs.

Perhaps the most notable food dish originating from Southern Maryland is stuffed ham, which is cabbage, kale, onions, spices and seasonings that are chopped and mixed, then stuffed into deep slits slashed in a whole, corned ham.

Seafood is popular amongst Southern Marylanders, given the region's location along the Chesapeake Bay and its tributaries. Both steamed crabs and crab cakes are considered Southern Maryland delicacies due to the large amount of harvesting of blue crabs from the bay. Also popular are oysters, which were once fished from the bay in great numbers, and served either fried, raw, or stuffed. Rockfish is considered one of the most prized fish dishes in Southern Maryland.

Towns and places in Southern Maryland include:

All content from Kiddle encyclopedia articles (including the article images and facts) can be freely used under Attribution-ShareAlike license, unless stated otherwise. Cite this article:
Southern Maryland Facts for Kids. Kiddle Encyclopedia.