An African golden cat (Profelis aurata) is a medium-sized cat. it weighs about 28 kg (62 lb) on average. The underside of its chest and chin are normally light-colored. In rare cases, they are pure white.

It is threatened due to deforestation and bushmeat hunting and listed as Vulnerable on the IUCN Red List.

Under captivity, it has shown that its fur color can change over time. This is affected by its age and external factors.

The head of an African golden cat has light spots around the eyes. In the 1960s, studies were done that showed that various colors of the African golden cat (red, brown, silver) were found in equal numbers in most areas of their habitats. Distinctive spots at the back of the cat are only found on cats in West Africa.

The African golden cat inhabits tropical forests from sea level to 3,000 m (9,800 ft). It prefers dense, moist forest with heavy undergrowth, and is often found close to rivers, but it may also be found in cloud forest, bamboo forests, and high moorland habitats.

The cat is found from Senegal in the west to Kenya in the east, and ranges as far north as the Central African Republic and as far south as northern Angola.

Due to its extremely reclusive habits, little is known about the behavior of African golden cats. They are solitary animals, and are normally crepuscular or nocturnal, although they have also been observed hunting during the day, depending on the availability of local prey.

African golden cats are able to climb, but hunt primarily on the ground. They mainly feed on tree hyrax, rodents, but also hunt birds, small monkeys, duikers, young of giant forest hog, and small antelope. They have also been known to take domestic poultry and livestock.

Knowledge of the African golden cat's reproductive habits is based on captive specimens. They breed readily in captivity, but grow and develop rapidly in comparison with other small cat species. One individual was reported to be scaling a 40-cm wall within 16 days of birth, reflecting a high degree of physical agility from an early age.

The kittens' eyes open within a week of birth, and they are weaned at 6–8 weeks. Females reach sexual maturity at 11 months of age, but the males do not do so until 18 months.

These cats live up to 12 years in captivity, but their lifespan in the wild is unknown. 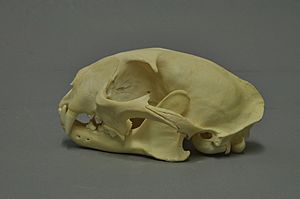 The African golden cat is threatened by extensive deforestation of tropical rainforests, their conversion to oil palm plantations coupled with mining activities and road building, thus destroying its essential habitat. It is also threatened by bushmeat hunting, particularly in the Congo Basin.

All content from Kiddle encyclopedia articles (including the article images and facts) can be freely used under Attribution-ShareAlike license, unless stated otherwise. Cite this article:
African golden cat Facts for Kids. Kiddle Encyclopedia.