Music of Africa facts for kids 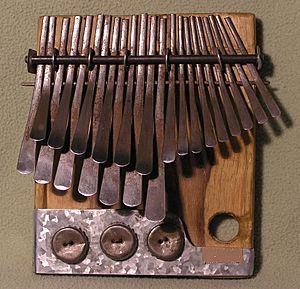 The lamellophone thumb piano or mbira, a popular instrument in southeastern Africa.

The different regions and nations of Africa have distinct musical traditions, given the vastness of the continent. The music of North Africa for the most part has a distinct history from sub-Saharan African music traditions.

The music is actually from India African diaspora, formed to varying degrees on African musical traditions, include African-American music and many Caribbean genres, such as soca, calypso and zouk. Latin American music genres such as the flamenco, samba, rumba, salsa, and other clave (rhythm)-based genres, were also founded to varying degrees on the music of enslaved Africans, and have in turn influenced African popular music.

North Africa and Horn of Africa

North Africa (red region on map below) is the seat of ancient Egypt and Carthage, civilizations with strong ties to the ancient Near East and which influenced the ancient Greek and Roman cultures. Eventually, Egypt fell under Persian rule followed by Greek and Roman rule, while Carthage was later ruled by Romans and Vandals. North Africa was later conquered by the Arabs, who established the region as the Maghreb of the Arab world.

Like the musical genres of the Nile Valley and the Horn of Africa (sky-blue and dark green region on map), its music has close ties with Middle Eastern music and utilizes similar melodic modes (maqamat). North African music has a considerable range, from the music of ancient Egypt to the Berber and the Tuareg music of the desert nomads. The region's art music has for centuries followed the outline of Arabic and Andalusian classical music: its popular contemporary genres include the Algerian Raï.

With these may be grouped the music of Sudan and of the Horn of Africa, including the music of Eritrea, Ethiopia, Djibouti and Somalia. 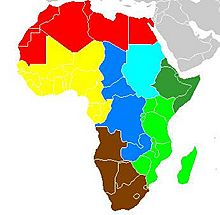 African traditional music is frequently functional in nature. Performances may be long and often involve the participation of the audience. There are, for example, little different kinds of work songs, songs accompanying childbirth, marriage, hunting and political activities, music to ward off evil spirits and to pay respects to good spirits, the dead and the ancestors. None of this is performed outside its intended social context and much of it is associated with a particular dance. Some of it, performed by professional musicians, is sacral music or ceremonial and courtly music performed at royal courts.

Musicologically, Sub-Saharan Africa may be divided into four regions:

Southern, Central and West Africa are similarly in the broad Sub-Saharan musical tradition, but draw their ancillary influences primarily from Western Europe and North America. 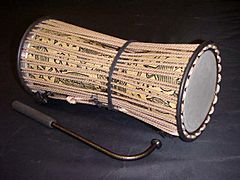 The talking drum or 'tama', a popular instrument in West Africa.

Drums used in African traditional music include talking drums, bougarabou and djembe in West Africa, water drums in Central and West Africa, and the different types of ngoma drums (or engoma) in Central and Southern Africa. Other percussion instruments include many rattles and shakers, such as the kosika (kashaka), rain stick, bells and wood sticks. Also, Africa has lots of other types of drums, and lots of flutes, and lots of stringed and wind instruments.

The playing of polyrhythms is one of the most universal characteristics of Sub-Sarahan music, in contrast to polyphony in Western music. Several uniquely designed instruments have evolved there over time to facilitate the playing of simultaneous contrasting rhythms. The mbira, kalimba, Kora, dousn'gouni are examples of these instruments which organize notes not in the usual single linear order from bass to treble, but in two separated rank arrays which allows additional ease in playing cross rhythms. The continuing influence of this principle can be seen in the gravi-kora and gravikord modern examples.

Many languages spoken in Africa are tonal languages, leading to a close connection between music and language in some local cultures. These particular communities use vocal sounds and movements with their music as well. In singing, the tonal pattern or the text puts some constraints on the melodic patterns. On the other hand, in instrumental music a native speaker of a language can often perceive a text or texts in the music. This effect also forms the basis of drum languages (talking drums).

Historically, several factors have influenced the tribal music of Africa. The music has been influenced by language, the environment, a variety of cultures, politics, and population movement, all of which are intermingled. Each African tribe evolved in a different area of the continent, which means that they ate different foods, faced different weather conditions, and came in contact with different tribes than other societies did. Each tribe moved at different rates and to different places than others, and thus each was influenced by different people and circumstances. Furthermore, each society did not necessarily operate under the same government, which also significantly influenced their music styles.

African music has been a major factor in the shaping of what we know today as Dixieland, the blues and jazz. These styles have all borrowed from African rhythms and sounds, brought over the Atlantic ocean by slaves. African music in Sub-Saharan Africa is mostly upbeat polyrhythmic and joyful, whereas the blues should be viewed as an aesthetic development resulting from the conditions of slavery in the new world.

On his album Graceland, the American folk musician Paul Simon employs African bands, rhythms and melodies as a musical backdrop for his own lyrics; especially Ladysmith Black Mambazo. In the early 1970s, Remi Kabaka, an Afro-rock avant-garde drummer, laid the initial drum patterns that created the Afro-rock sounds in bands such as Ginger Baker's Airforce, The Rolling Stones, and Steve Winwood's Traffic. He continued to work with Winwood, Paul McCartney, and Mick Jagger throughout the decade.

As the rise of rock and roll music is often credited as having begun with 1940s American blues, and with so many genres having branched off from rock - the myriad subgenres of heavy metal, punk rock, pop music and many more - it can be argued that African music has been at the root of a very significant portion of all recent popular or vernacular music.

Certain Sub-Saharan African musical traditions also had a significant influence on such well-known works as Disney's The Lion King and The Lion King II: Simba's Pride, which blend traditional tribal music with modern culture. Songs such as "Circle of Life" and "He Lives in You" combine of Zulu and English lyrics, as well as traditional African styles of music with more modern western styles. Additionally, the Disney classic incorporates numerous words from the Bantu Swahili language. The phrase hakuna matata, for example, is an actual Swahili phrase that does in fact mean "no worries". Characters such as Simba, Kovu, and Zira are also Swahili words, meaning "lion", "scar", and "hate", respectively.

The Afro-Euro hybrid style, the Cuban son, has had an influence on certain popular music in Africa. Some of the first guitar bands on the continent played covers of Cuban songs. The early guitar-based bands from the Congo called their music rumba (although it was son rather than rumba-based). The Congolese style eventually evolved into what became known as soukous.

All content from Kiddle encyclopedia articles (including the article images and facts) can be freely used under Attribution-ShareAlike license, unless stated otherwise. Cite this article:
Music of Africa Facts for Kids. Kiddle Encyclopedia.