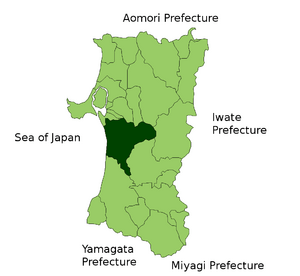 Map showing location of the city of Akita in Akita Prefecture

Akita (秋田市code: ja is deprecated , Akita-shi) is a Japanese city in Akita Prefecture on the island of Honshu. It is the capital city of the prefecture.

Akita has been one of the most important cities in the Tōhoku region since ancient times.

The Ashina clan held this part of northern Japan (Mutsu Province) in the 15-16th centuries.

The modern city of Akita was established on April 1, 1889.

Akita is the largest city on the western coast of the Tōhoku region.

All content from Kiddle encyclopedia articles (including the article images and facts) can be freely used under Attribution-ShareAlike license, unless stated otherwise. Cite this article:
Akita, Akita Facts for Kids. Kiddle Encyclopedia.