Kids Encyclopedia Facts
"The Albany" redirects here. For the theatre in Deptford, see The Albany Theatre. For other uses, see Albany (disambiguation).

The Albany, or simply Albany, is an apartment complex in Piccadilly, London.

The Albany was built in 1770–74 by Sir William Chambers for the newly created 1st Viscount Melbourne as Melbourne House. It is a three-storey mansion, seven bays (windows) wide, with a pair of service wings flanking a front courtyard. In 1791, Prince Frederick, Duke of York and Albany abandoned Dover House, Whitehall (now a government office), and took up residence. In 1802 the Duke in turn gave up the house and it was converted by Henry Holland into 69 bachelor apartments (known as "sets"). This was achieved by subdividing the main block and its two service wings, and by adding two new parallel long buildings covering most of the garden, running as far as a new rear gate building on Burlington Gardens. Holland's new buildings of 1802-3 flank a covered walkway supported on thin iron columns and with an upswept roof. The blocks are white painted render in a simpler Regency style than Chambers' work. Most sets are accessed off common staircases without doors, like Oxbridge colleges and the Inns of Court.

Since its conversion, the Albany has been a prestigious set of bachelor apartments in London. The residents have included such famous names as the poet Lord Byron and the future Prime Minister William Ewart Gladstone, and numerous members of the aristocracy.

During the Second World War, one of the buildings received significant damage from a German bomb, but was reconstructed after the war to appear as an exact replica.

Residents no longer have to be bachelors, although children under the age of 14 are not permitted to live there.

The apartments or "sets" are individually owned as flying freeholds, with the owners known as "Proprietors"; a set that came up for sale in 2007 had an advertised guide price of £2 million.

Around half the sets are owned by Peterhouse, a college of the University of Cambridge. These were acquired by William Stone (1857–1958) during World War 2. Stone, nicknamed the "Squire of Piccadilly", was a former scholar of Peterhouse, a bachelor and a lifelong resident of the Albany. He bequeathed 37 sets to the college, along with other endowments.

The Albany is governed by a Board of Trustees on behalf of the Proprietors. The annual rent of a set can be as much as £50,000 and prospective tenants are vetted by a committee before being allowed to take up residence. 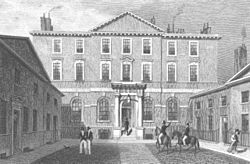 The names "Albany" and "the Albany" have both been used. The rules adopted in 1804 laid down that "the Premises mentioned in the foregoing Articles shall be called Albany". Both names have been used in the 19th and 20th centuries. In a 1958 review of a book about the building, Peace in Piccadilly, The Times wrote, "Albany or the Albany? It has long been a snobbish test of intimate knowledge of the West End. If one was in use, a man could feel superior by using the other. When G. S. Street wrote The Ghosts of Piccadilly in 1907, he said that 'the Albany' was then 'universal', but that to the earliest tenants it was 'Albany'."

An early use of the building in fiction was the novel, The Bachelor of the Albany (1848) by Marmion Wilard Savage. Mr Fascination Fledgeby, a moneylender in Charles Dickens' novel, Our Mutual Friend (1865) is described as living there. Several scenes from the book take place in his apartment.

In Oscar Wilde's play, The Importance of Being Earnest (1895), the character John (Jack) Worthing has a set at the Albany (number B.4), where he lives while staying in London under the assumed name of Ernest. A. J. Raffles, the gentleman burglar created by E. W. Hornung lived at the Albany, as did Roger Sheringham, the amateur detective in the works of Anthony Berkeley Cox, and the adventurer Lord John Roxton of Arthur Conan Doyle's novel The Lost World (1912). In The Foundling (1948), a novel by Georgette Heyer, Captain Gideon Ware of the Life Guards rents a set of chambers at the Albany. In the film Kind Hearts and Coronets (1949), Louis Mazzini takes a small set at Albany as he moves up the social ladder.

In the Major Harry Maxim novels by Gavin Lyall, George Harbinger, very senior civil servant, prospective inheritor of "half of Gloucestershire", and Harry's boss and/or co-conspirator, has an apartment at Albany where he lives with his spouse, Annette.

The list below is based mainly on the much longer list in the Survey of London. Many tenants were in residence for only a short time, when they were quite young.

All content from Kiddle encyclopedia articles (including the article images and facts) can be freely used under Attribution-ShareAlike license, unless stated otherwise. Cite this article:
Albany (London) Facts for Kids. Kiddle Encyclopedia.