The Alberta Legislature Building is located in Edmonton and is the meeting place of the Legislative Assembly and the Executive Council. It has occasionally been shortened to "the Ledge".

The Alberta Legislature Building is located at 10801 97 Avenue NW. Free tours of the facility are offered throughout the week. The building is also connected via underground walkway to the Grandin LRT Station and Government Centre Transit Centre. 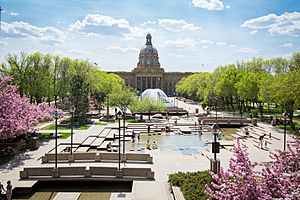 View from the north. A large plaza and greenspace is situated to the north of the legislative grounds.

The building is located on a promontory overlooking the scenic North Saskatchewan River valley near the location of Fort Edmonton, Mark V (1830–1915), a Hudson's Bay Company fur-trading post, a long-established economic and administrative centre of the western Prairies. It is just up the hill from the archaeological finds at Rossdale Flats to the east, remnants of a long-standing First Nations campsite and location of an earlier Fort Edmonton. The Legislature's location was selected shortly after Edmonton was confirmed as the provincial capital by the first session of the Legislature in 1906. The legislature building was located along 97 Avenue. That road was routed through a tunnel during the 1970s renovations to the grounds, allowing a large plaza to connect the legislature to a greenspace to the north.

To the west of the building, the grounds are bounded by 109 Street and the railway right-of-way coming north from the High Level Bridge, now used by the High Level Bridge Streetcar. Nearby is a walking path, connecting to the Victoria Park and Golf Course and the Grandin neighbourhood. To the north lies the "Government Centre" district within downtown Edmonton, south of Jasper Avenue, Edmonton's main street. Here are found several provincial government office buildings including the Federal Building. A short section of 108 Street, called "Capital Boulevard", is anchored by two terminating vistas, the legislature and MacEwan University's City Centre Campus. MacEwan is a part of the Old Canadian National rail yard redevelopment.

Nearby to the northeast is the Legislature Annex Building and the Government Centre transit centre, and nearby is also the Rossdale neighbourhood and Edmonton Ballpark. The security of the Legislature building and surrounding grounds are the responsibility of the Alberta Sheriffs Branch.

Several memorials and statues are situated within the Legislative Buildings, or the grounds surrounding it. The fountain inside the Legislature Building was installed during 1959 to commemorate the first visit of Queen Elizabeth II to the building. For the province's centennial, the Queen unveiled in the same structure a series of stained glass windows that highlight the role of the monarchy in Alberta over the previous century. The centre window, at the front entrance of the building, focuses on the reign of Elizabeth II, including her royal cypher surmounted by St. Edward's Crown and flanked by wild roses, while the other windows commemorate the reign of George VI, Edward VIII, George V, and Edward VII, along with provincial emblems such as the coat of arms and the wild rose.

Other items of significance on the Alberta Legislative grounds include the Lois Hole Memorial Garden, the statue of Princess Louise, Duchess of Argyll, and a memorial to Chief Crowfoot. 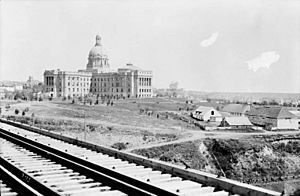 View of the building in 1914, shortly after it was opened.

The Alberta Legislature Building was built between 1907 and 1913 in the Beaux Arts style at the same time as the much larger Saskatchewan and Manitoba legislative buildings by architects Allan Merrick Jeffers and Richard Blakey. Montreal architect Percy Nobbs helped with the final revisions. Allan Merrick Jeffers served as the Alberta Provincial Architect from September 1907 to 1910. The Provincial Archives of Alberta holds drawings for virtually all provincial buildings executed under his supervision.

Construction first began in August 1907. The cornerstone was laid by the Governor General of Canada, Albert Grey, 4th Earl Grey, on October 1, 1909. On November 30, 1911, the first session was held in the building. The building was officially opened by Lord Grey's successor, Prince Arthur, Duke of Connaught and Strathearn, on September 3, 1912.

Jeffers may have been influenced by the State House of Rhode Island, where he had been a student. The style was associated originally with the École des Beaux-Arts in Paris and was fashionable in North America between 1895 and 1920.

The use of Greek, Roman, and Egyptian architectural influences was considered appropriate for a public building, as they suggested power, permanence, and tradition. Beaux-Arts buildings are characterized by a large central dome above a spacious rotunda, a symmetrical T-shaped plan, doors and windows decorated with arches or lintels, and a portico supported by massive columns. The dome has terracotta made by Gibbs and Canning of Tamworth, Staffordshire, England.

The building is supported on concrete piles and constructed around a steel skeleton. The first floor is faced with Vancouver Island granite; upper floors feature sandstone from the Glenbow Quarry in Calgary. The interior fittings include imported marble, mahogany, oak, and brass.

The building is about 57 metres (187 ft) in overall height; the project cost over $2 million at the time.

All content from Kiddle encyclopedia articles (including the article images and facts) can be freely used under Attribution-ShareAlike license, unless stated otherwise. Cite this article:
Alberta Legislature Building Facts for Kids. Kiddle Encyclopedia.