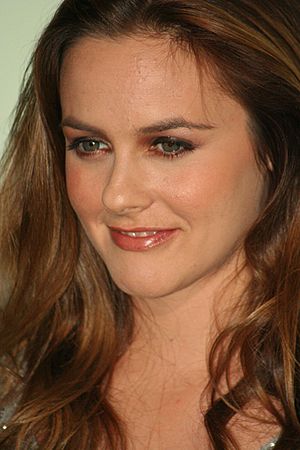 Alicia Silverstone (born October 4, 1976) is an American actress and activist. She was born in San Francisco, California to an English father and Scottish mother. Silverstone's movies include Clueless, Batman and Robin and Scooby-Doo 2: Monsters Unleashed.

Alicia has been married to musician, radio show host and actor Christopher Jarecki since June 11, 2005. They have one child together, a son named Bear Blu Jarecki (born May 5, 2011).

All content from Kiddle encyclopedia articles (including the article images and facts) can be freely used under Attribution-ShareAlike license, unless stated otherwise. Cite this article:
Alicia Silverstone Facts for Kids. Kiddle Encyclopedia.