Allerton is a working-class neighborhood geographically located in the East Bronx section of the Bronx, New York City. It is named in honor of Daniel Allerton, an early Bronx settler who purchased and farmed this area with his wife Hustace. It consists of two subsections called Bronxwood and Laconia. Its boundaries, starting from the north and moving clockwise, are Adee Avenue, Boston Road, and Gun Hill Road to the northeast; the IRT Dyre Avenue Line (5 train) to the east; Waring Avenue to the south; and Bronx River Parkway to the west. White Plains Road and Boston Road are the primary thoroughfares through Allerton.

The neighborhood is part of Bronx Community Board 11, and its ZIP Code is 10467. The area is patrolled by the NYPD's 49th Precinct. The local subway is the IRT White Plains Road Line, served by the 2 5 trains.

Allerton Avenue was ethnically divided in the 1950s through the 1980s by a distinct separation of Jewish and Italian residents. Primarily a commercial avenue west of Laconia Avenue, the geographic boundary between the Jewish and Italians was Bronxwood Avenue and Boston Post Road. Bordering the largely Jewish Pelham Parkway to the southern extreme of Williamsbridge, the area east of Boston Post Road was predominantly post-war immigrant Italian and to the west an older Jewish community. Mixed in were residents representing earlier 19th and 20th century migrations from Manhattan, largely of Irish and English-Irish extraction. The arrival of West Indians in the 1980s marked the transition, north of Allerton Avenue, from a distinctly Italian area to a West Indian one. West of Bronxwood Avenue, the arrival of Dominicans concurrently marked the end of the Jewish community north of Allerton Avenue (Laconia). Today, the area south of Allerton Avenue and east of Bronxwood Avenue has a large population of Italian-Americans and Albanian-Americans, as well as Asians, Hispanics, West-Indians, and other groups. In February 2014 Google Maps recognized Allerton as the name of a community that had previously been recognized as Williamsbridge or Bronxdale.

Allerton is dominated by multi-unit homes of various types. There are also some tenements scattered across the neighborhood, primarily within five blocks of the El on White Plains Road. The total land area is roughly two square miles. The area is low and flat. 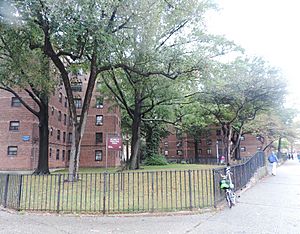 The entirety of Community District 11, which comprises Pelham Parkway, Allerton, and Morris Park, had 116,180 inhabitants as of NYC Health's 2018 Community Health Profile, with an average life expectancy of 79.9 years. This is lower than the median life expectancy of 81.2 for all New York City neighborhoods. Most inhabitants are youth and middle-aged adults: 22% are between the ages of between 0–17, 30% between 25–44, and 24% between 45–64. The ratio of college-aged and elderly residents was lower, at 9% and 14% respectively.

Allerton and Morris Park generally have a lower rate of college-educated residents than the rest of the city as of 2018[update]. While 32% of residents age 25 and older have a college education or higher, 24% have less than a high school education and 44% are high school graduates or have some college education. By contrast, 26% of Bronx residents and 43% of city residents have a college education or higher. The percentage of Allerton and Morris Park students excelling in math rose from 32% in 2000 to 48% in 2011, though reading achievement remained constant at 37% during the same time period.

The New York Public Library (NYPL) operates two branches nearby. The Allerton branch is located at 2740 Barnes Avenue. It opened in 1959 under a design by Hertz and Salerni and was renovated in 2015. The Eastchester branch is located at 1385 East Gun Hill Road. It has operated since 1950 and moved to its current one-story, 7,500-square-foot (700 m2) location in 1985.

All content from Kiddle encyclopedia articles (including the article images and facts) can be freely used under Attribution-ShareAlike license, unless stated otherwise. Cite this article:
Allerton, Bronx Facts for Kids. Kiddle Encyclopedia.